It been 14 years since JURASSIC PARK III was released and let's be honest, it wasn't that great of a film and a weak conclusion to what was a highly popular and profitable franchise. So when it was announced last year that Universal Pictures was reviving the series with a new (and fourth) entry, I was very hesitant. Let's face it: Hollywood has seriously run out of original ideas so they're continuing to raid their vaults to either remake or make new sequels of previously popular films. But after taking my family to see JURASSIC WORLD in 3D at the Regal Natomas 16 Theater, I was very surprised on how excellent it was! 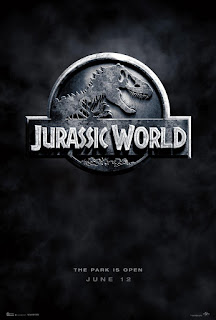 The film's official synopsis: 22 years after the original Jurassic Park failed, the new park (also known as Jurassic World) is open for business. After years of studying genetics the scientists on the park genetically engineer a new breed of dinosaur. When everything goes horribly wrong, will our heroes make it off the island?

This film was a lot more fun to watch than I was expecting it to be. It had action. It had scares. It had comedy, It had genetically created dinosaurs that ate a shit load of innocent people! And kids went to see this film! What the hell America? What is wrong with you? Have you no sense of morals these day? Don't you know you are desensitizing your children? If you take them to see this movie you're only making them want to go out and commit violence in the world!

Actually I'm just kidding! Take the kids to see this movie! It was awesome! Now back to my movie review.

First, this was a worthy entry to the series (given that JURASSIC PARK  III sucked really bad that's not saying much). It picks up after the first film, which also takes place on the original island. This was a smart move on both Universal and the filmmakers. If you want to have people come see it and enjoy it, have it tie in to the original because people love the first one.

Second, have interesting characters in the film. Sure there have been some arguments that Chris Pratt's character Owen is very masochistic and he demeans women in the film. Well, what did you expect from a Hollywood film? Political correctness? Look in this film and you'll find a plethora of old school stereotypes: an evil Asian scientist, a female in distress, annoying stupid kids getting into trouble, and a handsome brave alpha male to save the day. Did I leave anybody out?

Third, fill the screen with awesome special effects that will make them crap in their pants. With today's CGI effects, the dinosaurs look even more real than they did 22 years ago. And seeing it in 3D was pretty damn spectacular. But if you don't like 3D and if it gives you a headache, then 2D is just as cool.

Fourth, have an incredible script to go with your incredible CGI. Well....ok the script was kinda weak and the characters are kinda two-dimenional stereotypes like I previously mentioned. But it did have a beginning, a middle, and an end. So they got that right.

So JURASSIC WORLD is typical Hollywood escapism film and that's a good thing. It's a summer blockbuster popcorn action/adventure film and that's fine. Nothing wrong with that. It had it all and made a fun movie going experience so do check it out. Four out of five stars! Very entertaining!


JURASSIC WORLD is currently playing in both 2-D and 3-D in theaters nationwide, including at the Regal Natomas Stadium 16. To view showtimes, visit their website at www.regmovies.com.

Thanks for reading, and enjoy the show!
Posted by Philip Castor at 11:46 PM