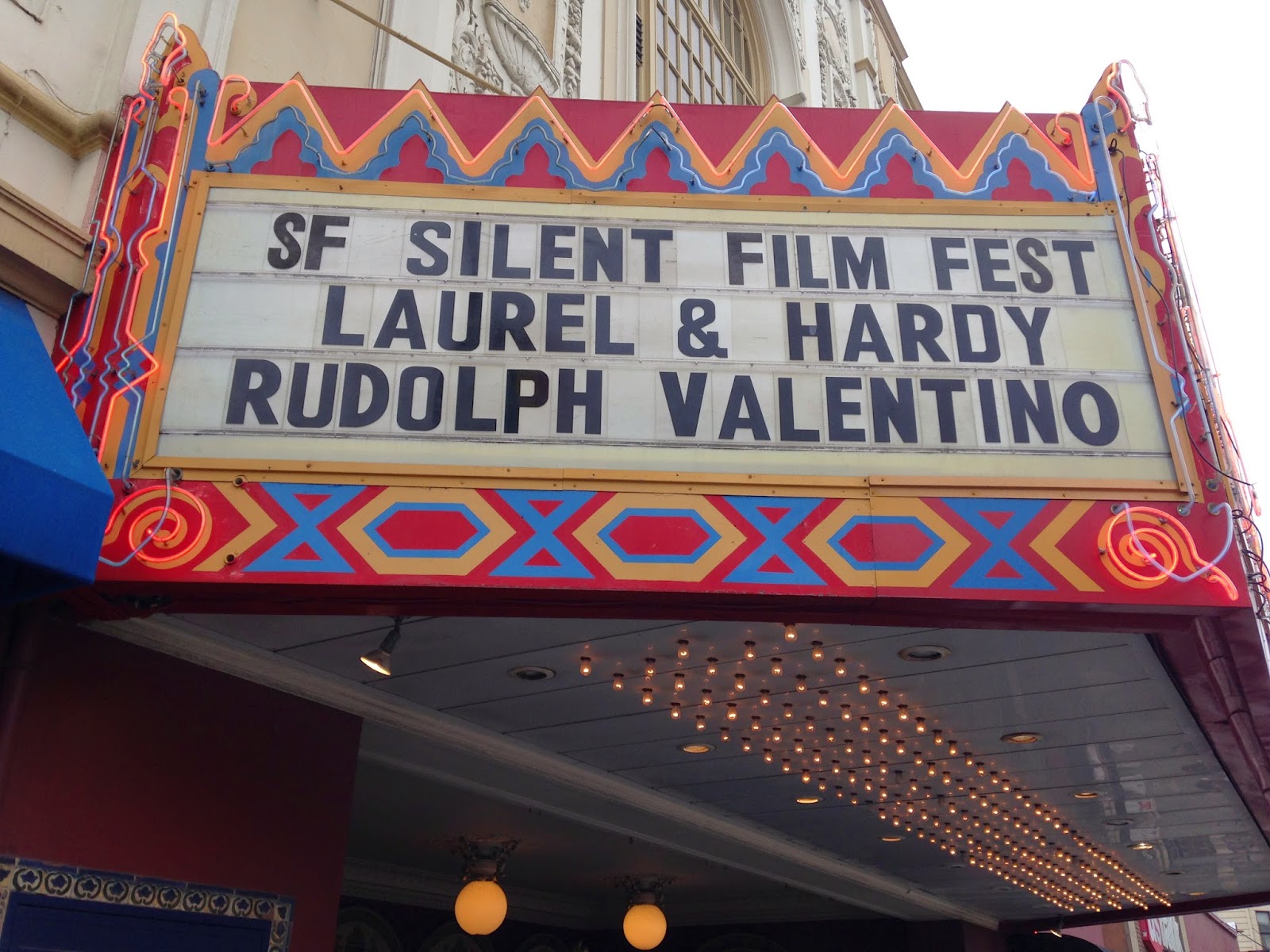 Greetings and salutations everybody! After taking some time off due to having major surgery, I'm ready to go back on my cinematic adventures! And the first thing I did was head on over to the Castro Theatre to attend the very first San Francisco Silent Film Festival's Silent Autumn Event! Now in the past the particular event was held in the winter, but the festival moved it to autumn. Now personally, it doesn't affect me because it gives me the chance to see all my old friends and to see some amazing silent movies. And Saturday's all-day event was nothing short of spectacular! What a perfect way for me to make my triumphant comeback to the world of film reviews! 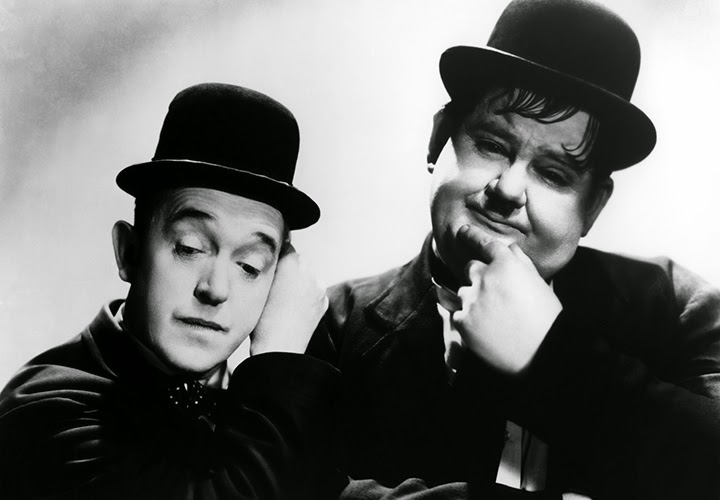 The show started at 11am with the program ANOTHER FINE MESS: SILENT LAUREL AND HARDY SHORTS. Also known as "The Boys," the program consisted on three classic silent shorts from their time at the infamous Hal Roach Studios. The three shorts were:

SHOULD MARRIED MEN GO HOME? (1928): When Laurel comes over to visit Hardy, hilarious hi-jinks ensues. When Mrs. Hardy tells them to go golfing, the fun continues when the boys try to impress a couple of females, only to end up in a mud fight with the other golfers.

TWO TARS (1928): The Boys are sailors on leave when they rent a car and meet with a couple of cutie dames. Soon they're stuck in a traffic jam which leads to an all-out temper tantrum with everybody commenting acts of vehicle vandalism. And by that I mean cars are torn apart. Funny stuff!!

BIG BUSINESS (1929): A staple over at the Niles Essanay Silent Film Museum, the boys are Christmas Trees sales reps. When they go knocking on the door of a grumpy old man (played by James Finlayson), the kid gloves come off and it's an all out war as both parties destroy each others properties while a cop looks on. One of my all time favorites!! Musical accompaniment was provided by the great Donald Sosin, who did a fantastic job of bring comedic melodies to these silent comedy classics! 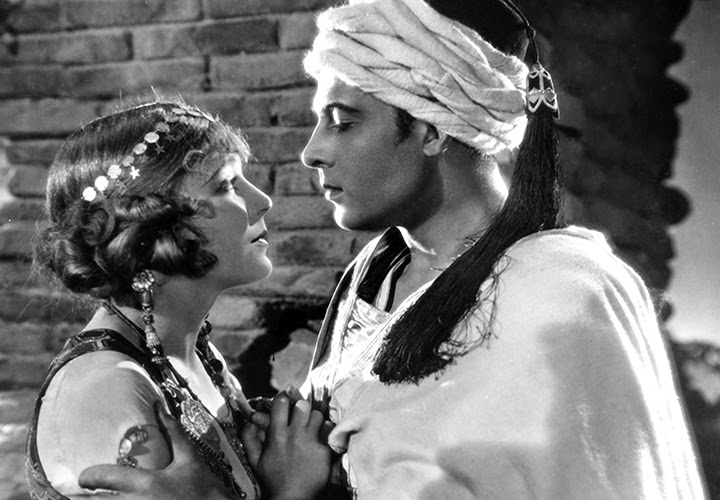 The second movie shown was the newly restored edition of SON OF THE SHEIK (1926) starring silent film heartthrob Rudolph Valentino and sexy Vilma Banky. Ahmed (Valentino) falls in love with the beautiful dancing girl Yasmin (Banky), but he's tricked into thinking that she was involved with him becoming kidnapped and held for ransom, he seeks out revenge and captures her.

In the film Valentino pulls double acting duty, portraying both the hot headed young Ahmed and his father The Sheik (which he previously played in THE SHEIK back in 1921). Originally he didn't want to make the film, but felt he had to to make the fans happy. It premiered in New York to rave reviews from critics and movie goers. However, Valentino unexpectedly passed away at the age of 31 on August 23, 1926, less than two weeks before it was released to theaters. This was his last film, but what a way to go out! The film was released to theaters by United Artists on September 5, 1926. The outstanding Alloy Orchestra provided an incredible score to the film! 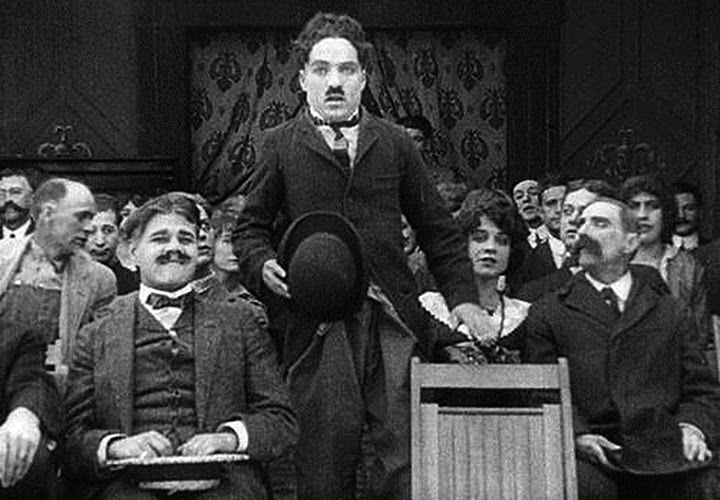 Up next was the program entitled A NIGHT AT THE CINEMA IN 1914, which was presented by the British Film Institute (or the BFI). The program was created to show American audiences what British movie goers were watching exactly 100 years ago! This was a real treat for all of us to watch. A total of 14 short films were shown, mostly newsreels and a couple of pretty funny comedies. The great Donald Sosin provided the music. Here's what was screened:

PALACE PANDEMONIUM (May 1914): Activist and campaign leader Emmeline Pankhurst is arrested Buckingham Palace for trying to go to the king himself so that women can have the right to vote.

AUSTRIAN TRAGEDY (July 1914): This newsreel showcases the Austro-Hungarian royal family and the wedding of Archduke Karl, who succeeded Franz Ferdinand following his assignation.

DOGS FOR THE ANTARCTIC (August 1914): Newsreel showing Sir Ernest Shackleton selecting his dogs for his next expedition trip to Antarctica.

DAISY DOODAD'S DIAL: A crazy comedy short starring Florence Turner as Daisy, who tries to enter a funny face making competition only to end up getting arrested for disturbing the peace.

EGYPT AND HER DEFENDERS: A brief newsreel about British Consul General Lord Kitchener (before he was Secretary of State for War) inspecting the troops.

LIEUTENANT PIMPLE AND THE STOLEN SUBMARINE: OK this short had me at hello? Lt. Pimple (whose face is painted to look like a monkey) watches over a submarine (made out of cardboard) only to let it get stolen. The props look like it came from an Ed Wood movie! So random and absurd that I laughed my head off!

SCOUT'S VALUABLE AID (August 1914): A couple of Sea Scouts stand on a cliff and look for invading fleets of Germans or something. Very short short.

GENERAL FRENCH'S CONTEMPTIBLE LITTLE ARMY: General French is the commander of the British army in France. He beats the Germans in this animated short by pioneering animator Lancelot Speed.

CHRISTMAS AT THE FRONT (December 1914): Troops celebrating Christmas at the front, but their whereabouts are withheld for security reasons.

THE PERILS OF PAULINE: An awesome action/adventure short starring Pearl White as Pauline, who accidentally hitches a ride in a hot air balloon and then is kidnapped and trapped in a burning house!

THE ROLLICKING RAJAH: This short originally came with a synchronized sound disc, but it has been lost for ages. However, the sheet music still survives and Donald Sosin played and sang the lyrics to this interesting short that features a singing Rajah and a bunch of lovely ladies wearing the latest styles and fashions.

A FILM JOHNNIE: And of course we couldn't end this program without Britain's favorite son Charlie Chaplin. In one of his earliest Keystone shorts, Charlie heads to the cinema, where he falls in love with the stunning Peggy Pierce. He then heads over to the Keystone studio where he meets Roscoe 'Fatty' Arbuckle, Mabel Normand, and Peggy. Oh and a whole lot of shenanigans transpire. 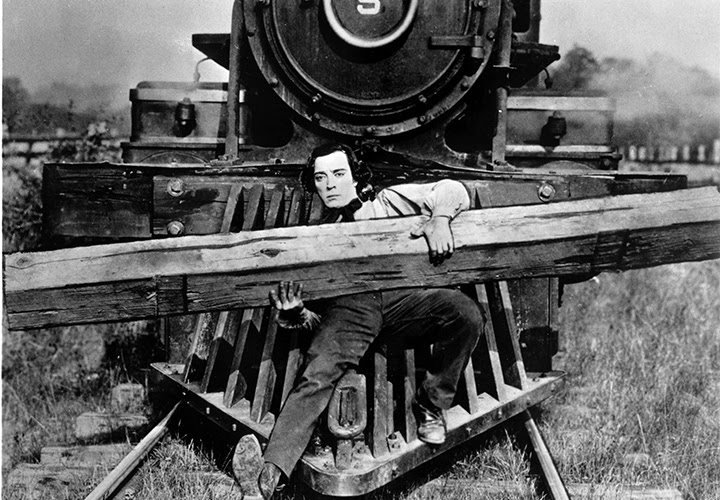 The next film screened is a silent film classic! A silent comedy gem! And it was my first time seeing it on the Castro screen! THE GENERAL (1926) is without question Buster Keaton's masterpiece. Set during the Civil War, Johnnie Grey (Keaton) is a train engineer on the General. He also loves his girl Annabelle Lee (Marion Mack). When Annabelle and the General are kidnapped by Union spies, Johnnie must cross the enemy lines to rescue both his loves and warn the Confederate army of the upcoming Yankee invasion. And oh yeah, there's a lot of funny stuff that happens in the movie!

There is nothing that I can say about this film that hasn't already been written. It doesn't get any better than this folks! This is not only one of the greatest silent films of all time, but also one of the greatest comedies of all time. This film is ranked in the Top Five of every critics lists. It has been revered as a classic. If you haven't seen this film yet, then get off your butt and go watch it now! The movie was released by United Artists on December 31, 1926. The musical score was provided by the Alloy Orchestra, who outdid themselves with their performance! 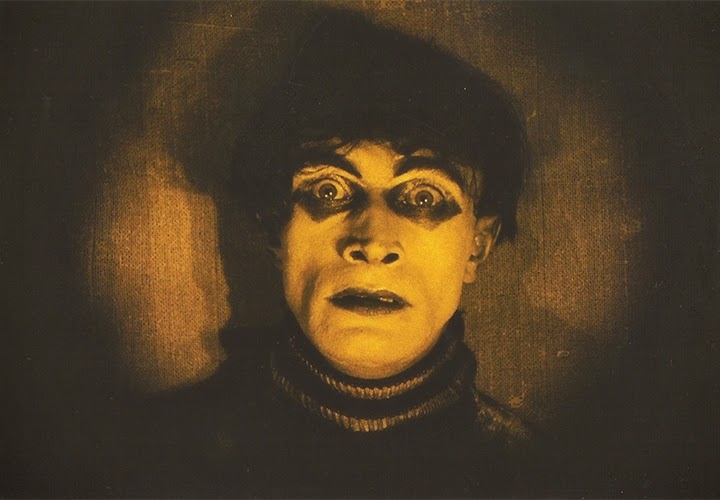 The last film of the Autumn Event seemed only fitting since next month is Halloween, so why not start the celebrations early. THE CABINET OF DR. CALIGARI (1920) is a prime example of German Expressionism at its finest. The film tells the story of a mad doctor who trains a sleepwalker named Cesare (Conrad Veidt) to kill people in order to study the effects of somnambulism. To this day the film, and its ending, still gives me the shivers.

With its distorted sets, bizarre lighting and shadows painted on canvases, and deformed spaces, the film achieves its nightmarish imagery right from the start and doesn't let you go till it twisted ending. Director Robert Wiene forever changed the face of German cinema as well as cinema itself. Many Universal horror filmmakers have cited the German Expressionism films as their inspiration for DRACULA, FRANKENSTEIN, and many others. The film was originally released by Decla-Bioscop in Germany on February 26, 1920. It was imported here in the states by Goldwyn Distributing Company on March 19, 1921. Donald Sosin provided the eerie musical score to this brand new 4K digital restoration!

And so my friends that is a wrap! What a great time I had! And don't forget The San Francisco Silent Film Festival will be celebrating its 20th anniversary on May 28-30, 2015 so mark those dates on your calendar! Now if you'd like to learn more about the SF Silent Film Festival, and how to become a member, visit their website at www.silentfilm.org.

Thanks for reading, and enjoy the show!
Posted by Philip Castor at 2:09 PM No comments: