Pixar Animation Studio is one of the finest animation studios of all time! With films like TOY STORY, CARS, WALL-E, FINDING NEMO and UP, the studio has released some of the most awarding winning and critically acclaimed movies of all time, and in the shortest amount of time. Today, I went and saw their latest endeavour, and it marks as one of my new favorite movie from them. All I can saw is that COCO is destined to be one the studio's very best!! 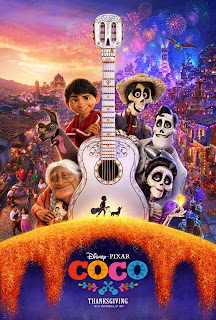 The film's official synopsis: Despite his family's baffling generations-old ban on music, Miguel dreams of becoming an accomplished musician like his idol, Ernesto de la Cruz. Desperate to prove his talent, Miguel finds himself in the stunning and colorful Land of the Dead following a mysterious chain of events. Along the way, he meets charming trickster Hector, and together, they set off on an extraordinary journey to unlock the real story behind Miguel's family history.

Being Hispanic American, I was completely moved on how much Pixar honored our heritage, our traditions, and how much family means to us. The norm is that Hollywood will fill theater screens with stereotypes and caricatures and they have relied on this for way too long. Finally, I saw a film that honored the Mexican community with intelligence, respect, and strong characters that we are emotionally invested in.

The movie was directed by Lee Unkrich, who's Pixar credits include co-directing TOY STORY 2, MONSTERS, INC., FINDING NEMO, and then directing TOY STORY 3 solo.  Joining him his his co-director Adrian Molina, whose writing credits include MONSTERS UNIVERSITY and THE GOOD DINOSAUR. Together, these two gentlemen have made one of Pixar's best films ever! The compositions and set-ups and excellent, the camera pans blend in with the film and they let the emotional scenes linger to accentuate the story. And let me tell you, this was such an emotional film!

Since this is a computer animation movie, I can't forget to mention it. The studio has come a long way since the release of TOY STORY. Holy cow!! The animation looks freaking amazing!! There is so much details in every single frame!! From the golden leaves to The Land of the Dead, it was a spectacular sight to behold!! An I thought the animation in CARS 3 was impressive!! The amount of detail is extraordinary!!

What I loved most about the movie is the story. It's a story based in Mexican traditions and folklore. All the characters are a representation of me, my family, and friends. For the first time, I felt proud seeing my people shown in a positive light, and at the heart of the story is family. Family comes first always, and everything else will fall into place.

COCO is one of the best family films of all time and Pixar's best to date!! You have never seen a film like this before!! And FYI, you will cry during the film, especially at the end! I cried. Twice. Maybe three time. Anyway, I loved this movie!! So take the family to your favorite theater and go see this movie!! 5 out of 5 stars!! Highly recommended!!


COCO is currently playing in theaters nationwide, including the Cinemark Century Theaters here in the Bay Area. To view showtimes, visit their website at http://cinemark.com.

Thanks for reading, and enjoy the show!
Posted by Philip Castor at 8:23 PM