Being born and raised here in San Jose, I grew up with hearing about the history of the most infamous haunted house in all of North America: The Winchester Mystery House. I am one of those who has taken a tour there - even their Halloween flashlight tour, which terrified my friends that I went there with. Its owner Sarah Winchester believed she was being haunted by ghosts, therefore, she continuously kept adding rooms to her home, housing the spirits that were taken by her family's rifles. Her life and legacy is tied to the history of San Jose, becoming a local folklore and legend. It was no surprise that Hollywood became interested in making a movie based her and her historical mansion. And thus, I went to the Cinelux Almaden Cafe & Lounge to see WINCHESTER and witness the story of Sarah Winchester unfold on the big screen. 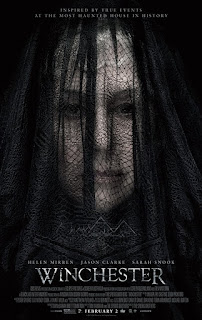 The film's official synopsis: Inspired by true events. On an isolated stretch of land 50 miles outside of San Francisco sits the most haunted house in the world. Built by Sarah Winchester, (Helen Mirren) heiress to the Winchester fortune, it is a house that knows no end. Constructed in an incessant twenty-four hour a day, seven day a week mania for decades, it stands seven stories tall and contains hundreds of rooms. To the outsider it looks like a monstrous monument to a disturbed woman's madness. But Sarah is not building for herself, for her niece (Sarah Snook) or for the brilliant Doctor Eric Price (Jason Clarke) whom she has summoned to the house. She is building a prison, an asylum for hundreds of vengeful ghosts, and the most terrifying among them have a score to settle with the Winchesters.

Helen Mirren carries the movie with her outstanding performance as Sarah Winchester. She brings class, vulnerability, and  strength to her role, elevating the movie to a higher level. The other contribution comes from Jason Clarke, surprisingly. He does a fine job of bringing Doctor Eric Price to life on screen, giving him faults and demons that we want him to overcome as to help Sarah with her supernatural situation. Sarah Snook portrays Sarah's niece Marion Marriott and is decent in the role. Truth be told, these three individuals helped being humanity and realism to their respective characters and raises the film beyond its PG-13 rating.

The film was directed by Michael Spierig and Peter Spierig, aka The Spierig Brothers. Coming off from last year's Halloween horror film JIGSAW (which you can read my review here), the brothers beautifully direct the film with grace, style, and fear. They do a wonderful job of combining character development with gothic thrills, much like the old Hammer Horror films from yesteryear. The brothers also co-wrote the film along with screenwriter Tom Vaughan. Though I liked the story, to me, it felt a little bit rushed and wasn't structured more soundly.

While I enjoyed it for the most part, and I did like the story and characters, something was missing. And all throughout the screening I couldn't figure out what the hell was missing. Then it occurred to me: the house itself wasn't represented very well in the film. While locals may know the life of Sarah Winchester, the only thing we know very well is the Winchester Mystery House itself. Fans and tourists of the mansion have been coming here for decades, taking the tours and seeing first hand how amazing and mesmerizing it truly is. The house is a character and should have been more predominate since it's now all we have to explore.

WINCHESTER is an entertaining ghost story, but lacks the necessary ingredients to make it a supernaturally thrilling film! With so much history, both Sarah Winchester and the Winchester Mystery House deserved more than just a run-of-the-mill, scary,  PG-13 ghost fright flick. The acting was great, but that was about it. I hope Sarah won't be too mad about how the movie turned out. 3 out of 5 stars! It's a future rental at best!


WINCHESTER is currently playing in theaters nationwide, including at the Cinelux Theaters here in the Bay Area. To view showtimes, visit their website at www.cineluxtheatres.com.

Thanks for reading, and enjoy the horror!
Posted by Philip Castor at 7:26 PM