During Super Bowl LII, while football fans were watching the Philadelphia eagles battle the New England Patriots, Netflix dropped one of the biggest announcements of all time, which caused a tidal wave of responses all over social media! People were shocked and surprised. The announcement was this: the streaming service provider would be showing THE CLOVERFIELD PARADOX (the long rumored third film of the franchise) right after the conclusion of the Super Bowl! It took me a couple of days to get around to seeing it, but I finally made time to watch this surprised gift from Netflix. 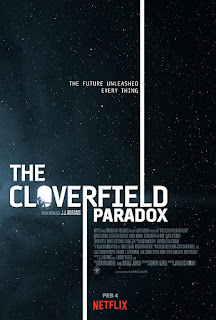 The film's official synopsis: Orbiting a planet on the brink of war, scientists test a device to solve an energy crisis, and end up face-to-face with a dark alternate reality.

Sooooooooo.............yeah, I didn't really care for it. It wasn't bad, but it wasn't that great either. The special effects were awesome, and that was about it.

My opinion is that if it wasn't part of the CLOVERFIELD Universe, I probably would've enjoyed it more. I think it should've been a stand-alone film, then it would've stood a better chance.

The film takes place in the future and is the beginning of the whole franchise. Now the film does set-up the events of the first film. In fact, on Facebook it was just discovered from a fan that if you play the first CLOVERFIELD movie right when the crew of the new film is transported to the alternate universe, it syncs up perfectly. Whether this was intentional or a happy accident by the filmmakers still remains a mystery, but leave it to the hardcore fans to shed light on some helpful information.

Directed by Julius Onah  and written by Oren Uziel and Doug Jung, the film fails to achieve that level of originality and terror among the stars. How many times have we seen the "astronauts trapped in space" scenario. It's been done to death, and it's been done by much better by other filmmakers. It feels like it was too rushed and we didn't get a chance to comprehend the life or death situation of their predicament.

Also, the character development was two-dimensional and I wasn't fully engaged with them. The film boasts a stellar cast that include Daniel Brühl, Gugu Mbatha-Raw, Chris O'Dowd, and  John Ortiz for example, but their characters didn't make me feel like I wanted to get to know them. I didn't care if they lived or died, nor did I care about them personally, which is a very bad thing to have in a movie. If you don't have interesting characters that make you emotionally invested in, then you don't have a movie.

The film's production is more interesting than the film itself. I was originally announced in November of 2012, under the title GOD PARTICLE, and produced once again by J.J. Abrams' Bad Robot Productions. The film's script was written by Oren Uziel and had the main plot of the space station crew, but it wasn't connected to CLOVERFIELD universe at all. It was only during production did Abrams decide to link the film to the first film (which is why I felt it should've been its own movie). The film was renamed, suffered from several delay releases, and then Netflix stepped in to pick up the film from Paramount for a whopping "more than $50 million" for the film rights. Needless to say, I think they overpaid for it.

Overall, THE CLOVERFIELD PARADOX is a boring, lackluster, failed sci-fi movie that didn't bring anything new to the franchise. I hate to say that, especially after the incredible 10 CLOVERFIELD LANE. So how did we come from that film to this one? I wish I knew the answer to that one. Instead, we're left scratching our heads and wondering why. 2 out of 5 stars! Only watch if you're really bored!


THE CLOVERFIELD PARADOX is now streaming exclusively on Netflix. To start your subscription, visit their website at www.netflix.com.

Thanks for reading, and enjoy the show!
Posted by Philip Castor at 2:37 PM