On the second Sunday of every month, the Niles Essanay Silent Film Museum hosts a Laurel & Hardy Talkie Matinee show, hosted by the Sons of the Desert gang. The museum has been doing this for years, and it was the first show I've attended in a very long time. Because of Valentine's Day falling on Wednesday of this week, the show was dubbed the LAUREL & HARDY TALKIE MATINEE VALENTINE EDITION, with all the films dedicated to the two biggest emotions of them all: love and laughter. And there was plenty of laughs!! 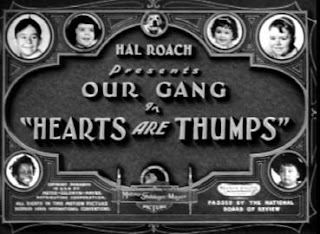 HEARTS AND THUMPS (1937): A classic Our Gang short! It's Valentine's Day at school and all the boys and girls are giving cards to one another. Except Spanky, Alfalfa, and Buckwheat, who form the He-Man Woman Haters Club. That lasts for about three seconds for Alfalfa when his sweetheart Darla comes and takes him away. So Spanky and Buckwheat ruin their Valentine's Day lunch with soap.

I remember seeing this all the time on TV when I was a kid. There was a Little Rascals show that showed all of the old OUR GANG shorts that were originally shown in theaters. A fun-filled one-reel short! The film was produced by Hal Roach studios and was released to theaters by MGM on April 3, 1937. 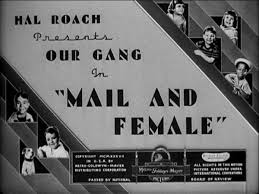 MAIL & FEMALE (1937): All the boys, lead by Spanky, form the He-Man Woman Hater Club (again) because they were not invited to one of the girl's parties. They make Alfalfa their leader, but he may not be it for too munch longer when the boys fine out he sent a love letter to Darla.

Again, another short I saw on TV when I was a kid. FYI: there is nothing more funnier than seeing Alfalfa dressed up as a girl and flirting with Spanky and Spike. This gag would be used regularly years later in the Bugs Bunny cartoons. The film was produced by Hal Roach studios and was released to theaters by MGM on November 13, 1937. 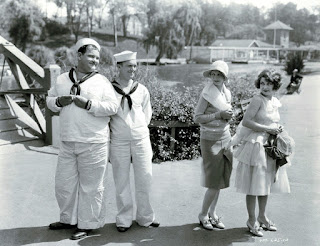 MEN O' WAR (1929): The boys are sailors on leave and meet a couple of lovely ladies (Anne Cornwall and Gloria Greer) in the park and invite them to have a glass of soda with them. However, they don't have enough money to pay for all their sodas, but they score big on a slot machine and then rent a boat and hijinks ensue.

This was only the third Laurel & Hardy talkie short. Hal Roach had beat MGM to the talkie market and soon Roach was making all his films with sound. Also known as MAN O' WAR, the film was released to theaters on June 29, 1929. 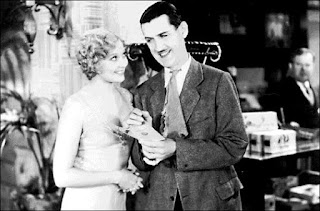 THE PIP OF PITTSBURGH (1931): Charley Chase helps his roommate out by going out on a blind date. Because his last date didn't turn out so great, he goes out of his way by being messy, gross looking slob. However, when he meets his date (the beautiful Thelma Todd) he regrets his decision immediately.

I've been a huge Charley Chase fan since I first saw his films back in 2006. It's unfortunate that he's not as remembered as his peers, such as Charlie Chaplin, Buster Keaton, and Harold Lloyd. This is because Chase never made the transition from short films to full length features. He did appear in a couple of Laurel & Hardy films, but he died of a heart attack in 1940. He was only 46 years old. Fortunately, his films still remain and we are lucky to see them here at the museum and on DVD. Charley's brother James Parrott directed the short as well as other shorts for Hal Roach. The film was produced by Hal Roach Studios and released by MGM to theaters on March 21, 1931. 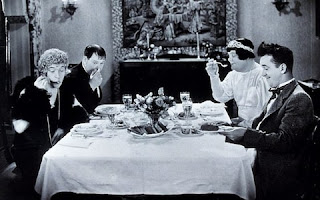 TWICE TWO (1933): Laurel & Hardy are married to each other's sisters and thus plan a dinner party to celebrate the wedding anniversaries together. What could go wrong? Well, a lot can go wrong....and it's funny! Mostly cause Laurel & Hardy are dressed in drag to portray the sisters.

This film was new to me and boy, was it funny! Over the years I've seen all of their silent films, but I'm still fairly new to their talking films. Another film I can scratch off my bucket list! The short was directed by James Parrott, produced by Hal Roach Studios, and distributed by MGM to theaters on February 25, 1933.

Well, there you have it folks! Another fun-filled cinematic adventure here in Niles!! And I can't wait to come back for more silent film and talkie comedies! The museum is open for tours every weekend from 12pm-4pm and every Saturday night there's a silent film show starting at 7:30 (doors open at 7pm). So if you would like to learn more about the Niles Essanay Silent Film Museum, becoming a member, to view their film schedule, and purchase DVD copy of the film, visit www.nilesfilmmuseum.org.

Thanks for reading, and enjoy the show!
Posted by Philip Castor at 7:53 PM