Today's Netflix Pick has its roots in Japanese manga folklore. Based on one of the most popular titles of all time, the manga "Death Note" was created by writer Tsugumi Ohba and illustrated by Takeshi Obata. It became such a huge sensation that it was adapted into a series of live-action films starting with the 2006 release of DEATH NOTE (which I saw at the then San Francisco International Asian American Film Festival). Three more movies were made afterwards. Then on April 30, 2009, Variety reported that Warner Bros. Pictures - who distributed the original Japanese films here in the states - had acquired the rights to do a remake. I witnessed the end results when I finally saw DEATH NOTE this past week. 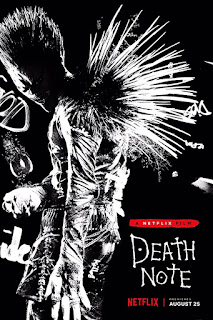 The film's official synopsis: Light Turner (Nat Wolff), a bright student, stumbles across a mystical notebook from a spirit named Ryuk (Willem Dafoe and Jason Liles) that has the power to kill any person whose name he writes in it. Light decides to launch a secret crusade to rid the streets of criminals. Soon, the student-turned-vigilante finds himself and his girlfriend Mia Sutton (Margaret Qualley) pursued by a famous detective known only by the alias L (Lakeith Stanfield).

The film was written by Charley Parlapanides, Vlas Parlapanides, and Jeremy Slater. They had the unimaginable task of taking the original Japanese source material and adapting it for American audiences, which is not an easy task. The manga is so dense that it is impossible to make it into a 101 minute movie. Plus with its Japanese mythology, folklore, and beliefs, it's translation would be lost on Americans who aren't familiar with the manga. Because of this, many American remakes lack that certain aspect that makes the J-Horror films amazing -  remakes like THE RING, PULSE, and THE GRUDGE come to mind. They do their best as to cram the bullet points that make the series so popular and, for all intents and purposes, they do a pretty good job. We have a decent three story arc, interesting characters, and a great climax that ties up most of the loose ends. But it is an Americanized film, so it's missing that Japanese flare.

Director Adam Wingard is no stranger to the horror genre. At age 19, he made his feature length debut with his film HOME SICK. He then went on to direct some great films like A HORRIBLE WAY TO DIE, YOU'RE NEXT and last year's BLAIR WITCH as well as directed segments for THE ABCs OF DEATH and both V/H/S films. Wingard knows the genre and has a visual look that complements it. His compositions are always filled, the camera lingers and pans feverishly, and fits the mood of the film very nicely. He is a very accomplished filmmaker and really enjoyed the look of the movie. He'll be directing the much hyped GODZILLA VS. KONG movie in 2020.

As far as the cast goes, you gotta give it up to Willem Dafoe for his performance. The man looks and sounds like a nightmare come true. The actor's face was motion captured and then digitally placed on actor Jason Liles' body. Together, they make a truly terrifying Ryuk! Nat Wolff does a decent job of portraying moody teenager Light Turner, but I thought Margaret Qualley was awesome as
Mia Sutton. She is so twisted and conniving that half the time I didn't know whether to like her or hoping someone would slap the hell outta her, which is all part of her charm. The weak link was Lakeith Stanfield as the mysterious detective L. I just found his character annoying and lacked any real threat to Light. But then again, I'm not an actor so what the hell do I know, right?

When Netflix made the film available for streaming on August 25, 2017, it received mixed and negative reviews. Granted, some were legit while others were just mean. Now it's not a perfect film, I feel like it was a decent remake. While it's not on par with the other American remakes, it's not that bad either. Even Tsugumi Ohba and Takeshi Obata liked the movie, so there's that.

DEATH NOTE is an interesting, thought provoking, teenage angst killer of a movie! It provokes that idea of what would I do if I had the power to take someone's life, and how would I handle that power and responsibility? It digs deep into what's it like to control death, only to discover that you can't control it at all. I think horror fans and fans of the manga should check it out! As I stated, it's not a perfect film, but it definitely has potential to be something more! 3 1/2 out of 5 stars! Definitely worth watching!


DEATH NOTE is now streaming exclusively on Netflix. To start your subscription, visit their website at www.netflix.com.

Thanks for reading, and enjoy the horror!
Posted by Philip Castor at 6:22 PM