Hello again and welcome to another installment of Phil's Netflix Picks! Yup, I found another movie to watch, and it's a Netflix Exclusive! And it's a horror comedy!! Originally, the film was produced by New Line Cinema before Netflix acquired the distribution rights to the film. I have heard many great reviews form critics and fans withing the horror community, so I was excited to finally see THE BABYSITTER. 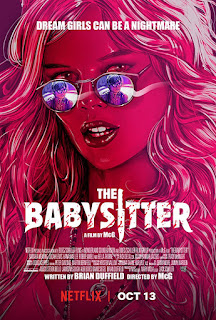 The film's official synopsis: Cole (Judah Lewis) loves his babysitter (Samara Weaving) Bee. She's hot, funny, and popular. One night, in a moment of defiance, Cole secretly stays up past his bedtime to discover she's actually a cold-blooded killer who's in league with the Devil. He now must spend his night evading Bee's band of killers who will stop at nothing to prevent Cole from spilling their dark secret. It's up to Cole to survive the night (and blow up a few people along the way).

Big round of applause to screenwriter Brian Duffield, who wrote of the most ingenious stories ever!! Holy crap was this a smart, ruthless, and hilarious movie!! It has the perfect balance of laughs and horror! The characters are very relatable and sympathetic. I mean, c'mon, who didn't have a crush on their super hot babysitter when they were kids?!? Now, add in some awesome gore, bloodshed, and hysterical hijinks and you have yourself on hell of a film!! It follows along the lines of recent horror comedies like SHAUN OF THE DEAD, TUCKER AND DALE VS. EVIL, and BETTER WATCH OUT. It's such a clever and witty script and I was completely blown away by it!

Director McG started off making music videos for artists like Sublime, The Offspring, and Sugar Ray. He then transitioned into directing Hollywood movies like the CHARLIE'S ANGEL films, WE ARE MARSHALL, TERMINATOR: SALVATION, and THIS MEANS WAR. McG brings that hyper-stylized, polished look to the movie. His compositions and set-ups are very in your face and has a flare for making gore fun to watch! He's a very accomplished filmmaker and has a special and unique way of telling a story. His visuals compliments Duffield's script perfectly and really hones in on the character's development throughout the course of the movie!

And speaking of characters, the cast is just awesome! Highlights include our two leads Judah Lewis and Samara Weaving, who have a amazing on-screen chemistry with one another that it's flawless. She looks and sounds like a real babysitter, who just so happens to be a cold-blooded psycho-killer who is smoking hot! Lewis is all of us - just a regular 12 year old who is in love with his babysitter but is too shy and nerdy to think that she would love him back. At the heart of the film, it's a coming-of-age story that will have viewers emotionally invested with these two.

THE BABYSITTER is one of the most outrageous, blood stained, batshit crazy, bonkers as hell, flat out gross out horror comedies of all time!! I freaking loved this movie. Horror fans have another binge-worthy movie to watch for all time!! 5 out of 5 stars!! Highly recommended!!


THE BABYSITTER is now streaming exclusively on Netflix. To start your subscription, visit their website at www.netflix.com.

Thanks for reading, and enjoy the horror!
Posted by Philip Castor at 1:11 PM