When I attended the 13 Years of Saturday Silents at the Edison! Program this past Saturday, one of the films shown at the museum that night was a short that has been five years in the making. Finally, the museum was finally going to screen BRONCHO BILLY AND THE BANDIT'S SECRET, the two-reel western that archivist/historian/filmmaker David Kiehn, cinematographer Sprague Anderson and the museum had been working on since 2012. The museum did screen the film during the Broncho Billy Silent Film Festival back in June of 2013, but it was only a workprint, meaning that it was a rough version of the film. So not only they showing the completed film hat night, the museum was having a DVD Release party, and yours truly could not wait to finally get a copy for myself. 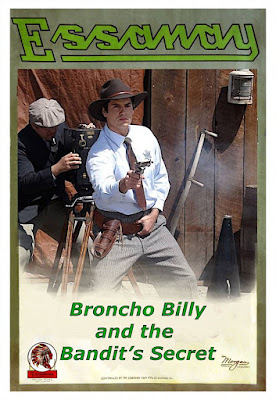 The film's official summery: In 1912, film pioneer and co-owner of the Essanay Film Manufacturing Company Gilbert "Broncho Billy" Anderson arrived in the small town of Niles, California, searching for the ideal location to film westerns. There he set up shop and over 350 films later had cemented the west coast branch of Essanay in film history, with major players such as Charlie Chaplin, Wallace Beery and Ben Turpin along for the ride before it all ended abruptly in 1916.

In 2012, the Niles Essanay Silent Film Museum produced a two-reel silent western to commemorate the 100th anniversary of the Essanay Film Manufacturing Company arriving in Niles. This inspired our museum curators to create a film as special as our little hamlet. Using equipment and techniques from the silent era and locations that are much like they were over 100 years ago, Broncho Billy and the Bandit's Secret presents a fictionalized account of Gilbert Anderson's arrival in Niles, and how the town sheriff joins forces with the movie gunslinger to bring a group of bandits to justice. Years in the making, with five different musical scores and an appearance by Diana Serra Cary (former silent film star Baby Peggy), it's a trip back in time unlike any other!

The movie was a sight to behold! It looked absolutely incredible! Anderson's cinematography was simply gorgeous! It looked like a 1913 silent movie! Kiehn's directing was fantastic as well, blending modern day with silent era set-ups and compositions. Both Kiehn and Anderson wrote the screenplay together, bringing that nostalgic magic to the silver screen. It's a simple story, yet it works very effectively. It brought me back to those days watching westerns with my friends.

The entire cast was phenomenal and should be commended for their performances! It's not easy to act in a silent movie. You must convey emotions without saying a word. It the expressions of their faces, the sad look in their eyes, body language; it's all these things and more. Christopher Green Goodwin was fantastic as the Sheriff. Bruce Cates has played Broncho Billy Anderson for years at the museum's film festivals and events, so he knew how to play the part. Together, they had great on-screen chemistry with each other. Add Felicity Hart (Sarah Paymer), William Rogue (Eli Paymer), Shawn Rowe (The Deputy), and a special appearance by the one and only Diana Serra Cary, and you have a cast that deserves a standing ovation!

While I was enjoying the movie immensely, I also found myself shedding a tear or two. This was the last film Sprague Anderson worked on. When I last saw him in late 2014, he was having health issues, but I paid it no mind. After all, he was way too stubborn to be sick and figured he'll bounce back. Then on October 31, 2017, on Halloween no less, Sprague passed away at 1:45pm. David's wife, Rena Azevedo Kiehn, made the announcement on her Facebook page.

During the intermission, I picked up my DVD copy of the film and since then I have been pouring through all of the excellent special features. It contains not one, not two, but five different musical scores by Judith Rosenberg, Bruce Loeb, Jon Mirsalis, Greg Pane and David Drazin! There's also an informative 40 minute documentary on the making of the film entitled Window to the Past, a short film of the centennial celebration and filmed recreation of Essanay's arrival in Niles shot back in 2012, outtakes, and a 1912 Essanay short film ALKALI IKE BESTS BRONCHO, directed by and starring Gilbert M Anderson, scanned in 4K and accompanied by Frederick Hodges.

BRONCHO BILLY AND THE BANDIT'S SECRET is a loving tribute to the silent film era! No where in the world will you see a silent film made with silent film cameras and techniques! What Kiehn, Anderson, and the rest of the cast and crew achieved is astounding! And is one of the finest films to come from Essanay! 5 out of 5 stars!! Highly recommended!!

The museum is open for tours every weekend from 12pm-4pm and every Saturday night there's a silent film show starting at 7:30 (doors open at 7pm). So if you would like to learn more about the Niles Essanay Silent Film Museum, becoming a member, to view their film schedule, and purchase DVD copy of the film, visit www.nilesfilmmuseum.org.

Thanks for reading, and enjoy the show!
Posted by Philip Castor at 6:54 PM