Back in 1995, one of the biggest films that year was JUMANJI, starring the late Robin Williams and the soon-to-be-star  Kirsten Dunst, Bonnie Hunt, David Alan Grier and Patricia Clarkson. The movie has gone on to become a classic among adults and kids alike. So when Sony and Columbia Pictures announced that they were making a sequel, I thought what the hell for? Seriously, am I the only one here that thinks Hollywood has no original ideas left and now all that they are making is remakes, sequels, and comic book movies? Well, it seems like everyone else liked the idea and rushed out to see the movie when it debuted back in December 2017. Everyone, except for me. I didn't want to see it. Nope, not interested. Then, everyone was talking about it. Then, it started to climb up the box office. Even my brother loved the damn thing. And so, I finally caved and went to my home away from home, Cinelux Almaden Cafe & Lounge, to see JUMANJI: WELCOME TO THE JUNGLE. 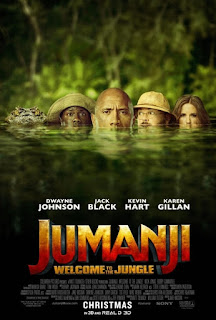 The film's official synopsis: In a brand new Jumanji adventure, four high school kids discover an old video game console and are drawn into the game's jungle setting, literally becoming the adult avatars they chose. What they discover is that you don't just play Jumanji - you must survive it. To beat the game and return to the real world, they'll have to go on the most dangerous adventure of their lives, discover what Alan Parrish left 20 years ago, and change the way they think about themselves - or they'll be stuck in the game forever, to be played by others without break.

Dwayne Johnson once again proves that he's out to take over the world, one role at a time! His comedic timing and action packed fight scenes show off his acting chops perfectly. First, he has to portray the awkward nerdy teenager Spencer. Then he has to grow the character from this to a strong and confident young adult who must save the day while trying to gather up the courage to ask his high school crush out on a date. Karen Gillan has been on a role since I first saw her a Amy Pond from the beloved BBC sci-fi series Doctor Who. Coming off the success of Marvel's GUARDIANS OF THE GALAXY franchise, she role as Martha is also a nerdy high schooler who is also shy and somewhat of a introvert. Over the course of the film, she discovers her inner bad ass and confesses her love for The Rock. Kevin Hart does his Kevin Hart schtick with his character Fridge. Jack Black plays the role of Bethany perfectly. Seriously, he acts and talks like a self-absorbed bitchy girl. Together, these four individuals will have you cheering and entertained all the way to the final end of the movie!

Director Jake Kasdan has made some hilarious comedy gems over the years. With titles like ORANGE COUNTY, WALK HARD: THE DEWEY COX STORY, BAD TEACHER, and SEX TAPE, Kasdan proves he has the comedic touch. Here, he combines both comedy with high-paced action and adventure and the results have been proven extremely profitable!

As I am writing this review, the movie has grossed an impressive $317 million here in North America, and a whopping $450.8 million overseas. Altogether, the movie has earned a worldwide gross of $767.8 million!! Holy crap I did not see that happening at all! I really thought it was going to bomb at the box office. Yup, I was so wrong about that!

Overall, JUMANJI: WELCOME TO THE JUNGLE is one of the most entertaining, action packed comedy flicks of last year and this year thus far!! Boy, did I really enjoy this popcorn movie!! So grab the family and go see this on the big screen!! 5 out of stars!! Highly recommended!!


JUMANJI: WELCOME TO THE JUNGLE is currently playing in theaters nationwide, including at the Cinelux Theaters here in the Bay Area. To view showtimes, visit their website at www.cineluxtheatres.com.

Thanks for reading, and enjoy the show!
Posted by Philip Castor at 8:44 PM