And so ladies and gentlemen, the final curtain call is over. The fat lady has sung. Mic has been dropped. Since 2012, we have been entertained by the a cappella group The Barden Bellas, that ragtag all-female singing outfit that has ranked in boffo box office moolah since actress Anna Kendrick's character Becca performed that damn cup song. Since then, the films have gained a huge following, but now, it looks like the Bellas have delivered their swan song, in this, their last outing as a group. So, I went to the Cinelux Almaden Café & Lounge to say (or rather sing in this case) goodbye to them in their last film PITCH PERFECT 3. 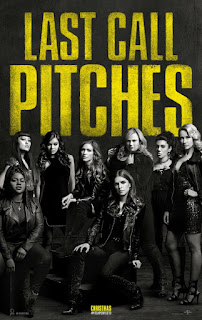 The film's official synopsis: After the highs of winning the World Championships, the Bellas find themselves split apart and discovering there aren't job prospects for making music with your mouth. But when they get the chance to reunite for an overseas USO tour, this group of awesome nerds will come together to make some music, and some questionable decisions, one last time.

The gang is all here again! Becca is still somewhat socially awkward but finds a new love interest named Theo (Guy Burnet).  Rebel Wilson returns as Fat Amy and she's still fat and annoying, but we get to meet her long lost dad Fergus (portrayed by John Lithgow with a British accent). Anna Camp's Aubrey still adds "aca" in front of normal words. Brittany Snow's Chloe (my favorite Bella by the way) is crazy silly still but now has an adorable meltdown because she misses her singing family of nerds. Plus she too becomes awkward when she meets Chicago (Matt Lanter). Also returning is Elizabeth Banks as the charismatically sassy Gail as well as John Michael Higgins' equally annoying John (and they only say one racist remark that pertains to France, which is a vast improvement).

The film was directed by Trish Sie, whose resume includes STEP UP ALL IN and the extremely popular music videos for the band OK Go (Here it Goes Again, All Is Not Lost and Upside Down & Inside Out). Originally, Banks - who has produced all three film - was signed on to direct the film, as she did with PITCH PERFECT 2 but dropped out for some unknown reason. While Sie does a fine job, it felt really rushed. Plus parts of the film were edited like a music video (who still remembers those things?). They were edited with quick cuts, panning camera angles and basically gave me a headache. It looked like it was edited by Michael Bay! I really wished that it was edited more traditionally and more fluently, as to move the story along without the choppiness.

What saves the film from becoming a total waste is the chemistry between all the actresses. There is so much amazing talent in the film and it's because of these ladies. After three movies together, they can play off from one another, sing harmoniously, and generate laughs from the audience. A perfect example of this is during the credits, where Gail and John show us the footage of the Bellas for their documentary. Some of it were scenes cut from the film (some appear in the film's trailer) but it was mostly outtakes and behind-the-scene footage of the ladies being silly and goofy, and I found that very sweet and charming. Over the course of three films, these actresses have truly formed a special bond with one another, and thus, become a family, which is the main theme in the movie. I sat there watching this and thought to myself, "Wow! They are having so much fun!" And that resonates in the movie. It seemed only fitting to end the franchise with this.

Oh, I almost forgot to mention the soundtrack. Well, to borrow from Aubrey's lingo, I would say that it's "aca-awesome" and "aca-tastic!" All the song are extremely catchy, but it's the renditions of Brittany Spears' "Toxic" and the late, great George Michael's "Freedom! '90" that got my foot tapping and hips moving and grooving while in my seat!

PITCH PERFECT 3 is a fun, silly, a capella satisfying finale to the film's franchise! It will be sad to not see the Bellas again, but we've got the music, the movies and the memories! Thank you for everything Bellas! Now take one last bow, and then go out into cinema history! 3 1/2 out of 5 stars! It's worth watching!


PITCH PERFECT 3 is currently playing in theaters nationwide, including at the Cinelux Theaters here in the Bay Area. To view showtimes, visit their website at www.cineluxtheatres.com.

Thanks for reading, and enjoy the show!
Posted by Philip Castor at 6:00 PM