Hello and welcome to 2018!! For my first movie of the new year, I decided that I would see a new horror movie! Gee, what a surprise, huh? Shocking, yes I know. But this was a horror movie I've wanting to see since the trailer was released some months ago. So today, I headed on over to the AMC Eastridge 15 to see INSIDIOUS: THE LAST KEY! 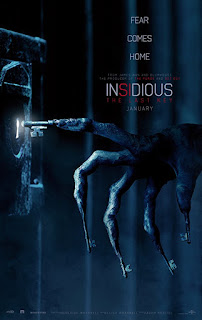 The film's official synopsis: In the supernatural thriller, which welcomes back franchise standout Lin Shaye as Dr. Elise Rainier, the brilliant parapsychologist faces her most fearsome and personal haunting yet: in her own family home.

Picking up where INSIDIOUS: CHAPTER 3 left off, the film once again is a prequel to the first film. Here, we learn more about Elise's early upbringing, her family and her special gift. We are exposed to some really awful truths that prove that monsters do exist in the real world. We learn that her special gift had dire ramifications that took an ugly turn for the worse, which lead to the untimely death of her mother Audrey (Tessa Ferrer) to her running away from her home and leaving her younger brother Christian (Bruce Davison) to deal with their abusive father Gerald (Josh Stewart). Later in the film, we are introduced to Christian's two daughters Melissa (Spencer Locke) and Imogen (Caitlin Gerard), the later who might also be blessed with the same special gift as Elise. Add her two dorky  co-workers Tucker and Specs (both Angus Sampson and Leigh Whannell reprising their roles, respectively) as comic reliefs, and you have one of the best casts for a horror film fans of the franchise could ask for!

Credit goes to our lead actress Lin Shaye, who at 75 years old, is carrying this series all on her shoulders. That doesn't happen ever in Hollywood, but we in the horror community think she is one hell of an actress! Just think about it: an elderly woman is our main character in a multi-million dollar franchise!! Baffles the mind to those in Hollywood, but Blumhouse (and Jason Blum to some degree) believe in Shaye's acting abilities and believe that this series wouldn't have lasted this long or succeeded as it has without her. And she is just fantastic in the film! Shaye conveys such conviction and believability as Elise that you're invested in her emotionally right from the start of the movie. One of the the most underrated actresses of all time, Lin Shaye deserves an honorary Oscar!!

Credit also goes to screenwriter Leigh Whannell for writing a smart, emotional and frightening script. Whannell has written the last movies and directed the third one as well. I really enjoyed the film's story: it had a great, origin story set-up, a great blend of both supernatural and real world scares, and ends it with a very intense and completely horrifying finale. Also, the ending ties in directly with the first film, trying all the loose ends up nicely. To quote the great Sith Lord Darth Vader, "The circle is now complete."

Even though the film was only released on Friday, January 5th, the film grossed a staggering $29.268 million over its opening weekend!! It did better than INSIDIOUS: CHAPTER 3, which did $22 million in its opening weekend back in 2015. While there's a rumbling about a possible fifth movie, it feels like this was the final one for the series. It ended how it should have and I hope it is left alone.

Overall, INSIDIOUS: THE LAST KEY is a supernaturally scary finale to the series and fans will no doubt enjoy it from start to finish! It contains fun and interesting characters, fantastic performances and all the things that make you afraid of the dark! 4 out of 5 stars!! Recommended viewing!!


INSIDIOUS: THE LAST KEY is now currently playing in theaters nationwide, including at the AMC Theaters here in the Bay Area. To view showtimes, visit their website at http://www.amctheatres.com.

Thanks for reading, and enjoy the horror!
Posted by Philip Castor at 7:06 PM