Hello again folks and welcome back to my movie binge weekend. So staying at the Camera 7, the next film I saw was JURASSIC PARK 3D. This year marks the 20th anniversary of the film, so Universal Pictures decided to re-release the film to theaters, but in 3D form. 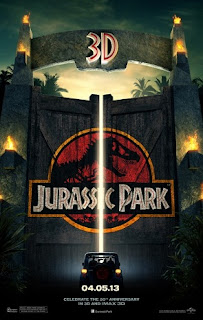 The film was originally released to theaters on June 11, 1993! That was 20 years ago! And if you have yet to see this film, there is something seriously wrong with you! The film's about a group of scientists who get whisked away on a rich white man's helicopter to his remote island fun park called Jurassic Park, filled with real live dinosaurs, thanks in large part to scientific DNA cloning. But unlike their ancestors, these reptiles are highly intelligent, and soon they all brake out and take over the island!

The special effects were done by Industrial Light and Magic (ILM) which is owned by filmmaker George Lucus. When the film was completed, Lucus realized that digital and computer technology had finally caught up with him and his imagination. It was this film that he decided that it was time to start work on the STAR WARS prequels. So like I always joked, "We can thank this film for those prequels, because if it wasn't for the fierce T-Rex, we wouldn't have Jar Jar Binks!"

So is it worth seeing in 3D? The short answer: No! The 3D didn't do anything for the film. It's already a great film to watch! So why do we need it in 3D? It's unnecessary folks. Now it is being shown in its original 2D format, so go see it that way! Plus you'll be saving some money!

JURASSIC PARK 3D is still a great movie to watch, but it's not really worth seeing in 3D. Stick to the 2D version. But still go see it because it looks amazing on the big screen! And when's the next time we'll get to see it on the big screen again? 3 out of 5 stars! See it in 2D!


JURASSIC PARK is currently playing in both 2D and 3D in theaters nationwide, including the Camera Cinemas here in the Bay Area. To view showtimes, visit their website at www.cameracinemas.com.

Thanks for reading, and enjoy the show!
Posted by Philip Castor at 10:11 PM