So the day has finally come. After months of watching the trailer online, after months reading about it in horror magazines and websites, after months of anticipation, the remake of EVIL DEAD has finally hit theaters. And yours truly was very excited about seeing it! So I made my way over to the Camera 12 in Downtown San Jose to witness this new re-imaging of the iconic horror classic. Was it worth it? Did it live up to all the hype? Is it worthy entry in this beloved and legendary horror series? Yes and no. 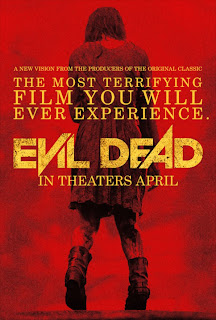 The premise of the EVIL DEAD is this: young Mia (Jane Levy), a recovering drug addict, heads to the old remote family cabin in the woods with her brother David (Shiloh Fernandez) and their friends Olivia (Jessica Lucas), Eric (Lou Taylor Pucci) and David's girlfriend Natalie (Elizabeth Blackmore). While trying to help Mia with her sobriety, they discover the Book of the Dead in the basement. Eric reads some of the passages from the book that summons the dormant demons that live in the woods. One by one the kids are picked off until there's only Mia left to fight off the evil dead spirits.

So let's begin with the positives that I found in the film. The production values are incredible! The cabin itself looks fantastic, set design looks great, and so is the cinematography. Another interesting fact is that director Fede Alvarez has stated that they didn't use any of CGI in the film. This statement was also said by the film's producers: writer/director of the original EVIL DEAD Sam Raimi, original producer Robert Tapert, and original star Bruce Campbell. In fact, Alvarez said in an online article by Bloody-Disgusting that, "We didn't do any CGI in the movie [...] Everything that you will see is real, which was really demanding. This was a very long shoot, 70 days of shooting at night. There's a reason people use CGI; it's cheaper and faster, I hate that. We researched a lot of magic tricks and illusion tricks." So this I applaud feverishly! Very rarely in this day of age where every single special effect is done with CGI, I was extremely blown away but their technical use of traditional special effects, which by the way, look freaking amazing!

As a special treat to longtime EVIL DEAD fans, there are several references to the original trilogy that are sprinkled throughout this film. First off, Sam Raimi's 1973 Oldsmobile Delta 88 can be seen in the opening scene with Mia and David arrive at the cabin. Mia wears a Michigan State sweatshirt, just like Betsy Baker's character Cheryl did in the original. Mia gets buck wild with a chainsaw like Campbell's Ash did in EVIL DEAD 2 and ARMY OF DARKNESS. There's also a tree rape scene, just like in the original, only less graphic. These are just some of the observations I made.

So the film is gory as hell! It's sickening as hell! The blood just pours out of the screen! There's body parts being sawed off, nails piercing flesh, carving of a tongue with a box cutter! Yup, there's so much blood in the film that it would make Dracula jealous with envy. But there was one major problem that I had with this film: it wasn't scary.

Yes my friends, it wasn't scary. It was very gory and graphic, but it wasn't scary. Now call me old fashioned, but I remember when horror films use to scare the hell outta me. When I first saw the original EVIL DEAD, it was scary! Raimi's POV shots of the evil spirits that roamed the forest were mesmerizing as well as haunting. It's the POV that made the original so scary. It would stalk each person in the cabin before it possessed them. Raimi used this technique to build up tension as well as scares. We were scared, then it was quiet. Then scared, then quiet. It was this roller coaster ride that made the original film so much fun to watch. With this remake, there's no build ups to the scares. It's all just gore, which look good like I said. But with without the build ups leading to the gore, you have nothing. And unfortunately, this film is NOT scary.

Another problem I had with the film was that I felt all the characters were too flat and interchangeable. Plus Jane Levy's Mia didn't look like a drug addict. She looked way too pretty to be one. But I will give her credit on this though: when she becomes possessed, she goes all out! So basically I'm saying that she plays a better possessed girl than a junkie.

When the film premiered at the ever popular South by Southwest Film Festival in Austin, TX on March 8, Alvarez announced that he was working on a sequel to the film. Then a couple of weeks later at the WonderCon Convention, during the EVIL DEAD panel, both Campbell and Alvarez said that their ultimate plan was for Alvarez's EVIL DEAD 2 and Raimi's ARMY OF DARKNESS 2 (which he will write with his brother Ivan Raimi) to be followed by a seventh EVIL DEAD film which would merge both Ash and Mia's worlds. So look at this film not as a remake, but as the next chapter in the EVIL DEAD universe. Also on a side note, stay after the credits for a special bonus scene.

So EVIL DEAD is a fun-filled gorefest ride of death, but it's not "The most terrifying film you will ever experience." The audience I saw it with were scared out of their minds, but unfortunately, it didn't have the same affect on me. But it's worth seeing for all the cool special effects. 3 out of 5 stars. It's worth a peak, but stick to the original.


EVIL DEAD is currently playing in theaters nationwide, including at the Camera Cinemas here in the Bay Area. To view showtimes, visit their website at www.cameracinemas.com.

Thanks for reading, and enjoy the show!
Posted by Philip Castor at 8:46 PM