Phil attends the Midnites For Maniacs "TWIRP: TRIBUTE TO SADIE HAWKINS" at the Castro Theatre-April 19, 2013 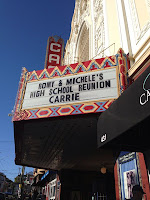 You know, since I'm always going to San Francisco to see all the cool movies events and festivals, I should just move up here! Yup, I'm back in the City by the Bay to attend the latest Midnites for Maniacs show! The theme for Friday's show was "TWIRP: TRIBUTE TO SADIE HAWKINS." Host Jesse Hawthorne Ficks once again screened three great films, all on 35mm film prints! And as always, Jesse screened some excellent trailers before each movie. Joining me on all this fun was my fellow bloggers Jason Wiener (Jason Watches Movies) and Ms. Marya E. Gates (Cinema Fanatic) as well as my good friend Laura, making her Castro Theatre debut! So sit back and relax everybody, and away we go!

The first movie screened was the hilarious 90's comedy ROMY AND MICHELE'S HIGH SCHOOL REUNION. Best friends Romy (Mira Sorvino) and Michele (Lisa Kudrow) are living the good life in Venice, California. Romy works as a cashier and Romy's unemployed, but hey, they're having fun going out to cool clubs and dancing...with themselves. But when Romy runs into her old classmate Heather Mooney (Janeane Garofalo) and tells her about their 10 year high school reunion, the girls pack up their car head back to Arizona. But along the drive there, the girls realize that they haven't really done much with their lives since high school. So they come up with a very clever lie, one that nearly destroys their friendship before they even arrive at the reunion!

I saw the film when it first came out and I laughed so hard in the theater. The film predates the blonde trend in movies (the LEGALLY BLONDE films and BLONDE AND BLONDER come to mind). Both Mira and Lisa have great on-screen chemistry and they play off one another with such ease and believability. They look and sound like the bestest friends in the whole wide world. Janeane Garofalo is great at playing spiteful, bitter, angry bitches that I found myself wondering if she typecast herself with this role? Could very well be. The film was directed by David Mirkin, who also made the 2001 film HEARTBREAKERS. Mirkin is more well known for directing several episodes of The Simpsons as well as writing the screenplay for THE SIMPSONS MOVIE. The film was originally released by Touchstone Pictures on April 25, 1997. Before the film, Ficks screened two vintage trailers: 1976's BAD NEWS BEARS and 1980's TIMES SQUARE.

Film number two of the night was the John Hughes teen classic PRETTY IN PINK. Andie Walsh (Molly Ringwald) is a high school senior working-class girl who lives on the wrong side of the tracks, wears old lady clothes and jewerly, has a unemployed drunk dad, and has a major crush on her pretty rich preppie classmate Blane McDonough (Andrew McCarthy). This causes much pain for her best friend Phil "Duckie" Dale (Jon Cryer), who is secretly and hopelessly in love with her. With their love for each other hanging in the balance, can Andie and Blane make their relationship work or will the social circles and circumstances keep them apart?

Even though he was an adult, John Hughes had the uncanny ability to tap into the teenage world and display all their angst, hang ups, and . Molly's Andie is a strong character: she knows who she is, she takes care of her father, makes her clothes, works at a hip record store, and still finds time to do her homework. On wonders what she sees in Blane; rich, spoiled, lives a lavish lifestyle, and doesn't really have to work at anything.  Even his name is freaking boring! Here is a classic example to that old adage "Opposites attract." But the screen stealer is John Cryer's Duckie all the way. Here is someone we can all relate to: he's weird, doesn't fit in with the other high school cliques, gets picked on, doesn't get the girl, but still comes out in the end. Another great attribute to the film is the kick ass soundtrack, boasting songs by the Psychedelic Furs, New Order, Orchestral Manoeuvres in the Dark, and The Smiths just to name a few. This 27th anniversary 35mm film print came courtesy from Paramount Pictures, which distributed the film on February 28, 1986. Three vintage trailers were screened before the film: 1987's THE PICK-UP ARTIST, 1985's THE BREAKFAST CLUB, and 1984's SIXTEEN CANDLES.

The third and final film of the night was a true horror classic! Based on the Stephen King novel of the same name, CARRIE tells the story of a young girl named Carrie White (Sissy Spacek). She's shy, unpopular, and all the other girls pick on her, especially popular mean girl Chris Hargensen (Nancy Allen). Also, she discovers that she has telekinesis, which freaks her out for a bit. It also doesn't help that her mother Margaret White (Piper Laurie) is a scary, mentally unstable, brainwashed  Christian fundamentalist wacko! Feeling pity for poor Carrie, other popular girl Sue Snell (Amy Irving) has her boyfriend Tommy Ross (William Katt) take her to the prom. Carrie has the time of her life, even becoming the prom queen. But when Chris and her boyfriend Billy Nolan (John Travolta) pull a prank on poor Carrie, she takes bloody revenge on the entire senior class and the faculty.

The film was directed by Brian De Palma, and he has the perfect blend of horror, suspense, and exploitation with the T&A in the beginning of the film. De Palma has never hid the fact that he was a huge Alfred Hitchcock fan and has referenced the Master of Suspense in most of his films. In here, the name of the school is Bates High School, a reference to Norman Bates from PSYCHO. Sissy Spacek was fantastic in the film, but Piper Laurie' performance was just unnerving and just freaking creepy! This newly struck 35mm film print came courtesy of MGM. The film was origianlly released by United Artists on November 3, 1976. Once again, Ficks screened several trailers: 1980's PROM NIGHT, 1981's BLOW OUT, 1980's DRESSED TO KILL, and 1982's CREEPSHOW.

Well folks, there you have it! Another M4M show has come and gone! If you missed out, no worries my friend! There's another show next month at the Castro Theatre on Friday, May 17th. The title for that show is called "Dirty Little Munchkins" so mark that date on your calendar! To learn more about Midnites for Maniacs, visit their website at www.midnitesformaniacs.com. To view upcoming shows at the Castro Theatre, visit their website at www.castrotheatre.com.

Thanks for reading, and enjoy the show!
Posted by Philip Castor at 10:08 PM