After the screening of THALE, I was more than ready to see the next film. The Screamfest folks then screened a short film entitled INCIDENT ON HIGHWAY 73. Right away I fell in love the film, mainly because it had the number 73 in the title and I was born in 1973. So I had a good feeling about the film already. 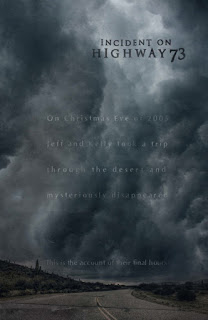 The film's official plotline is as follows: Five years ago, newly engaged couple, Jeff Bedict (Ian Alda) and Kelly Moga (Elizabeth Schmidt), took a trip through the desert from San Diego to New Mexico and mysteriously disappeared never to been seen or heard from again.

At a mere running time of just 27 minutes, director Brian Thompson packs on helluva punch with this short! First off, we have great characters to feel for. Both Elizabeth Schmidt and Ian Alda are perfect as couple Kelly and Jeff. They look, feel, and sound like a real couple, so right there I'm hooked. Next is the film's location, which was shot at scenic Desert Hot Springs, California! If you have never been there yet, don't! It looks like a place where cannibalistic hillbillies from THE HILLS HAVE EYES would live! It's just looks creepy! And speaking of creepy, the creepy meter goes haywire, especially towards the end of the film!
Needless to say, I felt sorry for Kelly and Jeff, but that's what I liked about the film. By the end, we are sympathetic for them. We don't want to see them come to any harm. But remember, this is a horror film after all!

And now for some fun facts about the film, the cast and its crew: It was shot in eight days under extreme weather conditions. Ian Alda is the nephew of legendary actor Alan Alda (TV's M*A*S*H and various films). This film was written by first time screenwriter Michael Kirkm, who is well known for producing big budget horror films like THE GRUDGE, THE GRUDGE 2 and BOOGEYMAN. Brian Thompson has directed videos for bands like As I Lay Dying and Killswitch Engage. Elizabeth Schmidt has acted in a number of short films, but she maybe recognized for her role as Carol on the day time soap opera As The World Turns.

INCIDENT ON HIGHWAY 73 is a creepy, nail biting, nerve racking little slice of cinema that really delivers the goods in such a short time. This is a perfect example of what a short horror film should be and what it can accomplish. 4 out of 5 stars!! Recommended!!

INCIDENT ON HIGHWAY 73 is still playing at film festivals across America. To learn more about the film, visit their official Facebook page and follow the film on Twitter as well!

Thanks for reading, and enjoy the show!
Posted by Philip Castor at 10:01 PM