So during my trip to Monsterpalooza, the fine folks at the Screamfest Horror Film Festival were on hand to screen a couple of really outstanding and eclectic films. I had heard of both films and I was very excited to see them. The first movie of the night was THALE, an interesting Norwegian horror/fantasy film written and directed by Aleksander L. Nordaas. 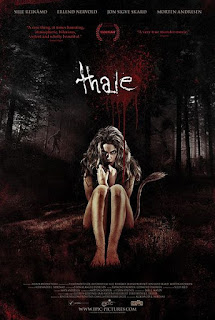 Meet Leo and Elvis (Jon Sigve Skard and Erlend Nervold repectively). They run a crime scene cleaning business. When they are sent out to clean a crime scene where only half a body was found (which in itself is a bad sign), they discover in the basement a Thale, a mythical character in Nordic folklore called the "huldra." Leo and Elvis soon discover that the Thale has been captive there for a number of years and now someone (or something) wants her back.

The movie is an interesting hybrid, channeling both the fantasy aspect (the mythical Thale) and the horror (the mysterious creatures that want the Thale). Nordaas does an excellent job of creating beauty, mood, and tension within the film. The cinematography was excellent, capturing the beauty of the Norwegian countryside. As the movie progresses, we the audience become sympathetic to both Leo and Elvis, who were just doing their job and as well as with the mute Thale, who can only remember bits and pieces of her life before becoming a captive.

The budget of the film was so small that not only Nordass directed the picture, he was also the writer, producer, cinematographer, and editor! In fact, the basement where the film takes place is actually his father's basement! Now that is low budget filmmaking at its finest!

Both Jon Sigve Skard and Erlend Nervold are great and have perfect on-screen chemistry. However, hats off to the stunning Silje Reinåmo, who as Thale didn't have any lines, but was able to convey a wide array of emotions using just her eyes, hands, and body movement. And yes, she is naked throughout the film, but her acting is so mesmerizing I forgot that she was naked. Now that should tell you just how talented she is!

In the end THALE is an astounding, intriguing, and original film that captures the imagination and wonder of what the possibilities of what movies can be! The film appeals to both horror and fantasy fans who want something different. Truly an unique and visually captivating film! 4 out of 5 stars!! Recommended!!


THALE is currently available on Video On Demand as well as on both Blue-Ray and DVD. To purchase a copy, visit your local retailer or visit the Amazon website at www.amazon.com. To learn more about the Screamfest Film Festival, visit their website at www.screamfestla.com.

Thanks for reading, and enjoy the show!
Posted by Philip Castor at 9:59 PM