So far 2013 is shaping up to be an interesting year for horror films being released to theaters. Some look very promising while others look bad. And then there are others that I wonder why they made in the first place. Case in point; Lionsgate's latest release THE LAST EXORCISM PART II is an unnecessary sequel to the film THE LAST EXORCISM. 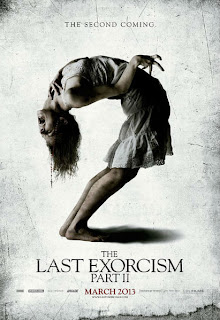 Picking up exactly where the first film left off, Nell Sweetzer (Ashley Bell) is found in a home somewhere in rural Louisiana. After being in a state of catatonic, she awakens with no real memory about what happened to her in the past several months.  She's then sent to Frank's home for girls. Nell's condition is improved and is no longer having the "bad dreams" that has plagued her. She has a job as a maid in a hotel and even has a new boyfriend. But soon her nightmares become a reality once again the evil force that once possessed her returns. As a result, Nell's last exorcism wasn't the last after all.

The film is a complete 180 from the previous installment. THE LAST EXORCISM was shot in that "found documentary style" that's so popular. With this, the movie was shot in the traditional style of filmmaking. So right away it looks and feels like a totally different movie. Not that it's an improvement over that last one.

The only saving grace of the film was Ashley Bell, whose performance is outstanding as usual. Now I had the pleasure of meeting Miss. Bell during the Cinequest Film Festival here in San Jose last month (it was Day Four, March 1st of the festival to be precise). It was after the screening of SPARKS, which she played the incredibly beautiful and bad ass super heroine Lady Heavenly. After the screening, I was chatting it up with Ashley and told her that I was a fan of hers. She said thanks and told me that I should check out her other new movie that was coming out soon. Turns out it was this film she was talking about. Bells' performance in the first film was legendary, however I feel that her talent was wasted here.

All in all, THE LAST EXORCISM PART II is an unwanted, unimaginative, and unnecessary sequel that doesn't even come close to living up to the standard set in the first film. Best to skip this one altogether. 2 out of 5 stars!


THE LAST EXORCISM PART II is currently playing in theaters nationwide, including at the Camera Cinemas here in the Bay Area. To view showtimes, visit their website at www.cameracinemas.com.

Thanks for reading, and enjoy the show!
Posted by Philip Castor at 9:51 PM