Phil sees THE PIRATES! BAND OF MISFITS in 3D at the Camera 7 Pruneyard Campbell-May 3, 2012

Every now and then, I like to indulge the inner child within me. The last family film I really enjoyed was THE MUPPETS, and that was back in November! So my inner child was throwing a major temper tantrum! Luckily for me the newest kid flick THE PIRATES! BAND OF MISFITS in 3D was playing at the Camera 7 in the Pruneyard. So after a long and hard day at work, I was ready to "laugh my booty off!" 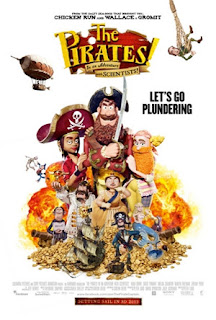 The film is based on the first two books from Gideon Defoe's The Pirates! series, The Pirates! in an Adventure with Scientists and The Pirates! in an Adventure with Whaling. Set in 1837, the Pirate Captain (voiced by Hugh Grant), the worst pirate sailing on the seven seas, leads a close-knit, rag-tag group of amateur pirates who are trying to make a name for themselves on the high seas. To prove himself and his crew, the Pirate Captain enters into the Pirate of the Year competition, with the winner being whomever can plunder the most. After several failed attempts to plunder mundane ships, the Pirate Captain boards the Beagle and captures Charles Darwin (voiced by David Tennant). Darwin recognizes the crew's pet Polly as the last living dodo, and implores the Pirate Captain to enter it into the Scientist of the Year competition at the Royal Academy in London for a valuable prize. The Pirate Captain directs his ship to London, despite warnings of Queen Victoria's (voiced by Imelda Staunton) detest for pirates. Cue up hilarious pirate hijinks, exploding ships, near death situations, and an intelligent monkey, you have a funny, silly, and entertaining film!

The film was directed by Jeff Newitt and Peter Lord, the man who created and gave us CHICKEN RUN, and of course, the WALLACE AND GROMIT series. The humor is very British, meaning that there are some jokes that fly right over kids' heads and hits us square in the face! And I love this, but that's been in children's films and cartoons for decades. Look at the old LOONEY TUNES cartoons now as an adult. See? What did I tell you! Bet you didn't realize all those innuendo jokes when you were a wee little lad, huh? But the British humor is dry and sharp, thanks to a cleverly written script by Gideon Defoe. The film has everything you could ask for: pirates, pirate ships, an evil queen, a smart monkey with cue cards, singing pirates, dancing pirates, a dodo bird, and action packed scenes that will keep your booty in your seat! And seeing it in 3D made me laugh even harder! OK not really, but it looked great!

THE PIRATES! BAND OF MISFITS is a smart, hysterical, and thoroughly entertaining family film that really deserves your attention! So make sure you take your family to see this film. And if you don't have a family of your own, borrow someone else's! Or just do what I did: indulge your inner child. And then go home and play pirates with the neighborhood kids. Four out of five stars!!


THE PIRATES! BAND OF MISFITS is playing in both 2D and 3D in theaters nationwide, including at the Camera Cinemas here in the Bay Area. To view showtimes, visit their website at www.cameracinemas.com.

Thanks for reading, and enjoy the show!
Posted by Philip Castor at 5:48 PM