Phil sees THE AVENGERS in 3D at the Camera 7 Pruneyard Campbell-May 4, 2012

And so, it has finally arrived. After the release of IRON MAN in 2008, and the rest of the Marvel Studios films (IRON MAN 2, THE INCREDIBLE HULK, THOR and CAPTAIN AMERICA: THE FIRST AVENGER), we have finally come to this moment that's been four years in the making! Tonight I saw the new Marvel Studios film THE AVENGERS in 3D at the Camera 7 in the Pruneyard in Campbell. Was it worth the wait? Was it worth the hype? Was it worth seeing in 3D? I can answer all these questions with just one word: YES!! 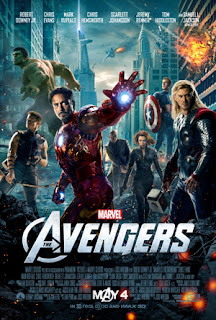 Director Joss Whedon is on a roll this summer! First his horror film THE CABIN IN THE WOODS (he produced and co-wrote the film) was released last month to critical praise. Now with this film, he shows us he can not only handle a big budgeted, superhero ensemble picture but he can also kickoff the the summer blockbuster season like no other!

All of our familiar friends from the previous Marvel films are reunited and it feels so good. And like the comics, we get to see how heroes duke it out before shifting their eyes towards Loki and his interplanetary army of space creatures. Again Downy Jr. is great as the highly intelligent and highly arrogant Tony Stark while Evan's Captain America shows us that while he is a man out of time, he is till the leader to look up to. Ruffalo is now the third actor to portray Bruce Banner aka The Hulk (Eric Bana and Edward Norton being the first two) and to be honest, I think he is the best Banner out all of them. He brings to the character intelligence, awkwardness and hesitation, which I feel the others only brought two out of the three. Johansson is smart strong and sexy as the Black Widow, but the sexiness is downplayed. Like all of Whedon's female characters, they are tough, fierce, powerful, and fully in charge. Like Buffy, the Black Widow is a female to admire and worship because she is a strong female character and not because she has curves and breasts.

The film has already broken records all across America and around the world. As of this writing, the film is about to make over a billion dollars in ticker sales! A BILLION DOLLARS!! That my friends is a lot of tickets! As for the 3D effects, they are outstanding!! It takes the film to a whole new level, especially with the invasion scene at the end. Speaking of endings, make sure to stick around for not one, but two bonus scenes! The first one comes after the first part of the credits with all of the actors names, and the last one ant the very end. It's no surprise that I'm telling you this. Remember this is a Marvel film, they all have bonus scenes at the end!

So, in case you forgot, THE AVENGERS is THE summer blockbuster to see! To try to say anything else about the film would be redundant, so go see this movie now!! Five out of five stars! Highly recomended!!


THE AVENGERS is playing in both 2D and 3D in theaters nationwide, including at the Camera Cinemas here in the Bay Area. To view showtimes, visit their website at www.cameracinemas.com.

Thanks for reading, and enjoy the show!
Posted by Philip Castor at 1:26 AM