The world we live in as become so anally PC that sometimes I think this country needs an enema. So comedy films really come into play in times like these. Films that really push the envelope and makes laugh hysterically for all the wrong reasons. So in comedian Sacha Baron Cohen's newest film THE DICTATOR, we are made to laugh at the most inappropriate topics, issues, and scenes. And I laughed at them all with glee! 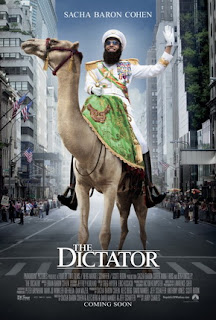 In the film Cohen portrays Admiral General Aladeen, a dictator from the fictional North African country of the Republic of Wadiya. A ruthless, egotistical, and at times an idiotic dictator, his advisor Tamir (Ben Kingsley) informs him that he is summoned by the UN to address their concerns about his nuclear program. Once he arrives in New York, he is kidnapped by an FBI Agent (John C. Reilly) and has his beard shaved off. Unrecognizable, he befriends a woman named Zoey (Anna Faris) who runs a local organic grocery store. But Aladeen discovers that his kidnapping was a part of plot to turn Republic of Wadiya into a democracy and now must find a way to prevent this atrocity from happening.

The film was directed by Larry Charles, who directed Cohen's other two films; 2006's unbelievably hilarious BORAT and 2009's equally successful BRUNO. With this film, Charles keeps the pace of the film quick and funny. Cohen's performance is nothing short of brilliant. He says some of the most hysterical lines I have ever heard. If you don't believe me, here are some quotes from the movie that made me cry:

No these quotes are tame compared to what else he says, as with everyone else in the film! Now I don't want to say too much more because I don't want to spoil the film for all of you, but you will laugh hard and be shocked by it all at the same time!

THE DICTATOR is a politically incorrect film and its funny as hell! Of course after watching this film you might want to take a shower because you will feel dirty laughing at this. If you're planning on taking a date to see this film, make sure that person has a sense of humor. If not, you're gonna have a lot of explaining to do. Four and half out of five stars! Highly recommended!!


THE DICTATOR is currently in theaters nationwide, including at the Camera Cinemas here in the Bay Area. To view showtimes, visit their website at www.cameracinemas.com.

Thanks for reading, and enjoy the show!
Posted by Philip Castor at 1:07 PM