It's been ten years since the release of MEN IN BLACK 2. Hard to believe it has taken Hollywood this long to film the next sequel, but MEN IN BLACK 3 in 3D is a great and entertaining sequel that was defiantly worth the wait! 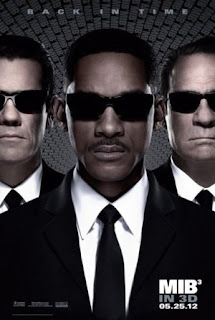 The film begins the intergalactic criminal Boris the Animal (Jemaine Clement) escapes from the LunarMax prison on Earth's moon. Soon Agent K (Tommy Lee Jones) and his partner Agent J (Will Smith) begin their pursuit of Boris. However he travels back in time and kills Agent K, thus alternating time. Agent J travels back to the year 1969, where he meets that era's Agent K (Josh Brolin) to warn him about Boris, who also team up with his 1969 counterpart to thwart the Men In Black from preventing them from carrying out their evil plans.

Based on the old Malibu comic book from the early 90's, the film was written by screenwriters Lowell Cunningham and Etan Cohen (no relation to the Cohen brothers). The story is simple enough, but it's a tight script with a clear direction of where it wants to go. It has a strong beginning, middle, and end.

Another nice element to the film is the character development. We learn why Agent K the way he is, and with Agent J, we see him become a better man, dare I say a wiser man. When he travels back in time, J likes this 1969 Agent K better, but that K is about to learn a hard lesson in life. A lesson that will hit J hard. Kudos to both Smith and Jones who, after a decade, can come back and get into their respective characters so easily. And also a great job on Brolin's performance at getting Jone's characteristics down! He said in interviews that this was the hardest role to play, for the simple fact that he had to impersonate Jone's K. No doubt it was tough, but he pulled it off perfectly!

As for the 3D special feature, it's a nice touch, but only in certain scenes. When Smith's J jumps off the Empire State Building to travel back in time, it works there. But overall, I felt that it was unnecessary. I would recommended seeing it in 2D, but if you really want to spend the extra $5, then by all means, go for it.

MEN IN BLACK 3 IN 3D is a great, action packed blockbuster that really closes out the franchise beautifully. Hopefully there won't be any more sequels. This is how a series should end; no loose ends, everybody comes out on top, and good triumphs over evil. A job well done. Four out of five stars!


MEN IN BLACK 3 is currently screening in both 2D and 3D in theaters nationwide, including at the Camera Cinemas here in the Bay Area. To view showtimes, visit their website at http://www.cameracinemas.com.

Thanks for reading, and enjoy the show!
Posted by Philip Castor at 9:12 PM