Majority of the time, the Hollywood romantic comedies start at the beginning of a couple's relationship, chronicling their madcap adventures to see if their love was meant to be. But what happens after that? Do they still remain or does it end? These happy-go-lucky romantic comedies are a dime a dozen and are pretty fluffy and sappy to the point of disgust. But what if their was a film that chronicled a relationship in the middle of a transformation? Like say, an engagement that is continuously put on hold that compromises a relationship? This is the premise of THE FIVE-YEAR ENGAGEMENT, starring Jason Segal and Emily Blunt and co-written, directed and produced by Nicholas Stoller. 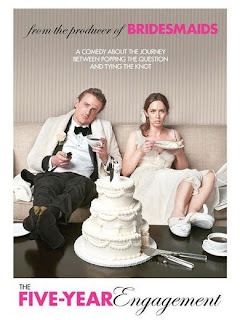 The film's about couple Tom Solomon (Segal) and Violet Barnes (Blunt), who have been together for a year and are now engaged. It looks as though our couple will be living happily ever after. However, a series of events (both hilarious and sad) interfere with their happy ending, resulting with them having to prolong their wedding. Things get worse as both have to sacrifice their dreams for one another and their realization that their wedding might not come to fruition. Throw in great performances by Chris Pratt, Alison Brie, Rhys Ifans, Mindy Kaling, Chris Parnell, Jacki Weaver, David Paymer and Kevin Hartand you have one funny film on your hands.

This is not your typical romantic comedy here folks. What we have here is a clever script written by both Stoller and Segal that strays away from the norm and gives us something fresh and unique. Most films today don't begin a year into relationships, let alone the complications of trying to tie the knot. Incorporating real life problems and situations such as relocating, change in careers, deaths of family members, and having doubts about their relationship, we are given a sense reality that most other films in this genre severely lack. But remember that this is also a comedy, and the laughs come from unexpected moments, so be prepared to laugh out loud from the most unlikeliness situations.

Kuddos to both Segal and Blunt, who turn in great performances in the film. Both have fantastic on-screen chemistry that really draws the viewer into the story. We truly believe in their love and hope they do get married. Another great couple to look for in the film is Tom's best friend Alex (Pratt) and Violet's younger sister Suzie (Brie), who hook up at their engagement party, only to get married before Tom and Violet. Look for some hilarious moments when all four of these characters appear on screen all at once. Both Segal and Blunt have been extremely busy as of late. Blunt recently appeared in my other favorite romantic comedy this year SALMON FISHING IN THE YEMEN, co-starring with Ewan McGregor. Segal co-wrote and starred (along with Amy Adams) in last year's family film classic THE MUPPETS. Interesting little trivia for you movie buffs: Blunt had a cameo appearance in that film with Segal. She portrayed Miss Piggy's receptionist.

Director Stoller has once again made another comedic gem of a film. But then again, would you expect anything less from the man who brought us FORGETTING SARAH MARSHALL and GET HIM TO THE GREEK. Also helping out with producing the film is Judd Apatow, the man responsible for films such as THE 40 YEAR OLD VIRGIN, SUPERBAD, and BRIDEMAIDS, so you know it's going to be a damn good, funny movie.

In the end, THE FIVE-YEAR ENGAGEMENT is a hilarious and touching romantic comedy that breaks away from the rest of the pack. The film is sweet, heartwarming and flat out funny! So make sure you bring a date to this movie and be prepared to laugh, cry, and laugh again. Four and a half out of five stars!


THE FIVE YEAR ENGAGEMENT is currently playing in theaters nationwide, including at the Camera Cinemas here in the Bay Area. To view showtimes, visit their website at www.cameracinemas.com.

Thanks for reading, and enjoy the show!
Posted by Philip Castor at 10:13 AM