On Sunday I made it out to the Camera 12 in downtown San Jose to, once again, go on one of my many movie binges. The first film I started my day off with was a sequel that, to my surprise, was actually pretty damn funny. Of course I talking about AMERICAN REUNION, the fourth installment of the AMERICAN PIE franchise. 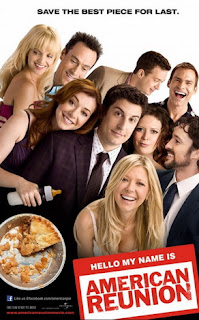 The whole gang comes back home to East Great Falls, Michigan for their 10 year high school reunion. Everybody's been very busy since graduating. Jim and his wife Michelle (Jason Biggs and Alyson Hannigan) have a two year old son and are having trouble keeping their sex life going. Kevin (Thomas Ian Nicholas) is married to a woman named Ellie (Charlene Amoia) and works from home as an architect. Chris "Oz" Ostreicher (Chris Klien) is now an NFL sportscaster living in Los Angeles with his super hot supermodel girlfriend Mia (Katrina Bowden). Finch (Eddie Kaye Thomas) has supposedly gone missing while traveling all around the world. Heather (Mena Suvari) is now a nurse and dating a heart surgeon named Ron (Jay Harrington). Vicky (Tara Reid) lives in New York and Stifler (Seann William Scott) is still the same, only now he's the bitch, working as a temp at an investment firm. Oh how the mighty have fallen. But when the guys get reconnect, it's like old times again as they find themselves in hilarious situations that they haven't been in since high school. Add to the mix Jim's widow dad Noah (Eugene Levy ), the hot girl next door that Jim use to babysit Kara (Ali Korbin), Stifler's mom (Jennifer Coolidge), and Finch's mom (Rebecca De Mornay) and you have a recipe for laughs, side cramps, and grotesque humor not seen since the original film!

The film feels like visiting some old friends that you haven't seen in a long time. This is the first time that the entire cast has been together since AMERICAN PIE 2. The guys once again fall back into their roles that made them famous, and reminds us just how much fun being young and stupid was. However life changes a person and all our friends have grown up and matured. Except for Stifler, who refuses to grow up and wants to keep the high school flame alive. Much to the chagrin of Jim, Kevin, Chris, and Finch, who remind him that high school was ten years ago (thirteen in the real world). Old feelings begin to brew between Chris and Heather, even though their respective others continue to interrupt them. Jim and Michelle discover that having a child has cooled down their sex life, and they plan to reignite their passion by recreating their prom night at their reunion. And we finally get to see Jim's dad meet Stifler's mom. Also look for cameo appearances by John Cho, Natasha Lyonne, Justin Isfeld and Shannon Elizabeth.

Directors Jon Hurwitz and Hayden Schlossberg are able to capture lighting in the bottle once again, but with interesting results. While the film contains the gross out humor and colorful metaphors that we have grown to love, we see ourselves in these characters. We have grown so much since the first film, and the world has changed drastically as well. But in this familiar world, we can forget about the plight of today and be transported back with these characters that we have grown up with. Like them, we all have jobs, responsibilities, and even families. By adding this ingredient of connection, we can see ourselves in Jim, Michelle, Stifler, and the rest of the gang.

AMERICAN REUNION is the best film of the series since the first film. It's also a welcome change of pace. With all these other Hollywood sequels coming out, here is a film that lives up to the tradition of the first film. It's funny, it's touching, and most importantly, it's relatable. Go see it for yourself and remember to bring a friend. Four out of five stars!


AMERICAN REUNION is currently playing in theaters nationwide, including at the Camera Cinemas here in the Bay Area. To view showtimes, visit their website at www.cameracinemas.com.

Thanks for reading, and enjoy the show!
Posted by Philip Castor at 2:37 PM