This past Friday night my good friend Amanda and I wanted to see a movie. So being the gentleman I am, I said she could pick out the movie. She had decided to see the film 21 JUMP STREET starring Jonah Hill and Channing Tatum. Now I had heard from numerous friends of mine that they loved this film, saying that it was the funniest film they had ever seen. Now I have seen some funny films in my lifetime (I am after all a film critic), but at first I was a bit sceptical. But my friend really wanted to see the film, so we did. And I am very glad that we did because the film really was that damn funny! 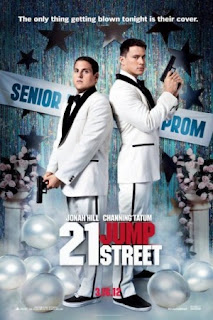 Morton Schmidt (Hill) and Greg Jenko (Tatum) are former high school classmates who meet again at police academy. Schmidt was a nerd while Jenko was a jock. Now as cops they are trying to make a difference. But when their first bust walks away because Jenko forgot to read the drug dealer his Miranda Rights, the two are reassigned to a revived specialty division on 21 Jump Street. There they meet their new boss Captain Dickson (Ice Cube) and are given their new assignment. Because of their youthful appearances, they are assigned to go back to their old high school as brothers to stop a new synthetic drug from spreading to other campuses by finding the supplier. Soon the guys find themselves in too deep with high school hijinks, throwing parties and crashing the prom to capture the drug supplier. Also appearing in the film are Brie Larson, Rob Riggle, DeRay Davis, Dave Franco (), Jake Johnson, Johnny Simmons, Johnny Pemberton, Dakota Johnson, Ellie Kemper and also look for cameos by original 21 JUMP STREET alumi Johnny Depp and Peter DeLuise.

I can't remember the last time I went to see a comedy and laughed all the way through it. Hill and Tatum are hilarious in this buddy cop action/comedy. Another great aspect that unfolded was that seven years after graduating from high school, the definition of cool has totally changed. So now Schmidt, who was ridiculed for being the shy, over sensitive, eco-friendly nerd, is now the cool kid in school while Jenko's jock mentality renders him unpopular. So by having these two characters swapping their respective high school rankings, they awaken hidden talents and abilities that they never knew existed. As a result of this, they grow as characters and help move the movie forward to its ultimate shoot 'em up climax.

21 JUMP STREET is a flat out, balls-to-the-wall, laugh out loud, action packed comedy of the year! Like I said I had my own doubts about seeing this film, but like the old saying goes, "Never judge a book by its cover." So don't judge this film by its poster. Go see this film and be prepared to have yourself one ridiculously fun time at the movies! Five out of five stars!


21 JUMP STREET is currently playing in theaters nationwide, including at the Camera Cinemas here in the Bay Area. To view showtimes, visit their website at www.cameracinemas.com.

Thanks for reading, and enjoy the show!
Posted by Philip Castor at 6:50 PM