So it's been a long time since I hung out with my good friend and film buddy Kelly, and I came up with the idea of seeing a movie. So we both headed over to the Camera 12 in Downtown San Jose to see the film BUCKY LAWSON: BORN TO BE A STAR, which was ending today. And I have to say that it was a funny movie that I actually enjoyed! 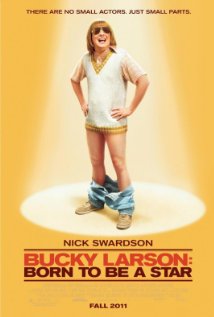 Ok, now the humor in the film is not your typical humor. It's a blend of gross-out shenanigans and random, left of field humor. And you know what, it works. Seeing Bucky being pantsed at a party, revealing his "mighty bush," the eccentric comedy of SNL alum Kevin Nealon (playing Bucky's insane roommate Gary), and Stephan Dorff's Dick Shadow's arsenal of dick jokes and references. Riccic plays Kathy with sympathy, gusto, and she's adorable in the film. And, of course, Swardson's portrayal as Bucky was hilarious, with a dash of innocence, mid-western values, and ejaculation superpowers (you'll understand the last one once you see the film).

BUCKY LARSON: BORN TO BE A STAR is currently in theaters nationwide. To view showtimes for your local theater and to purchase tickets, visit Fandango's website at http://www.fandango.com/

Posted by Philip Castor at 7:22 PM