Phil attends the exclusive screening of PEARL JAM TWENTY at the Camera 3-Sept. 20, 2011

Last night I had the great fortune to attend a very special screening of director Cameron Crowe's new documentary entitled PEARL JAM TWENTY at the very cool Camera 3 Theaters in Downtown San Jose! The Camera 3 is also the home of the world famous Psycho Donuts, which makes some of the most delicious and eclectic named donuts in town! After purchasing some awesomely yummy donuts from the kind nurses behind the counter, I made my way to the front row to watch the film. 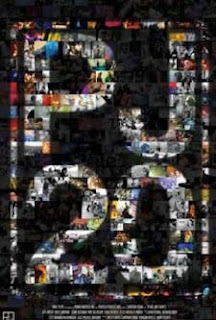 PJ20 documents the band's rise to super stardom through candid interviews and archival footage. The film begins with two of its founders: Jeff Ament and Stone Gassard and how these two friends formed their previous bands Green River and the influential Mother Love Bone. With their charismatic front man Andy Wood, MLB was on the brink of becoming the band of the 90s, but with the death of Andy, both Ament and Gossard teamed up with another childhood friend Mike McCready to form a new band. Upon receiving a demo tape from a San Diego surfer named Eddie Vedder, the band known as Pearl Jam was formed. With the release of their debut album Ten, the band burst into the mainstream and found themselves in the spotlight, much to the dismay for the band members.

Cameron Crowe was a music journalist in Seattle in the mid-80s and he was there when the whole "Seattle Scene" was beginning to form. Having that access, Crowe was easily able to obtain the nearly 1,200 hours of archival footage of the band, while simultaneously getting some very intimate interviews from the band, as well as from Matt Cameron (former drummer of Soundgarden and the band's current drummer), Chris Cornell (also from Soundgarden and Temple of The Dog), as well as from Crowe himself. The film also chronicles their distrust of the mainstream, their pulling back from the spotlight, their fight with ticketmaster, and their now freedom to purse their musical dreams without interference.

Because the screening sold out, the Camera 3 management informed the crowd that the film's distributor was so pleased with the turn out, that they agreed to have encore screenings of the film for a week starting this Friday! So to all you Pearl Jam fans who couldn't attend the screening, now you have a chance to see the film!

PEARL JAM TWENTY is a fantastic documentary about one of the most important bands from the 1990s, and their journey from grunge band to revered musical artists. Highly recommended film about an amazing band!

PEARL JAM TWENTY will be playing once daily from Sept. 23-29 at the Camera 3 in Downtown San Jose. To view showtimes, visit their website at http://www.cameracinemas.com

Thanks for reading, and enjoy the show!
Posted by Philip Castor at 4:45 PM