Since coming back from my trip to Hollywood, I fell behind in my movie screenings. So this weekend I went on a movie binge and tried to see as many films that I could. I started at the Camera 7 in the Pruneyard Campbell and saw two films there. The first was a film that has been getting a lot of praise, so of course, I had to see it. The film THE HELP lives up to its praise, and I really was surprised at how great the film was. 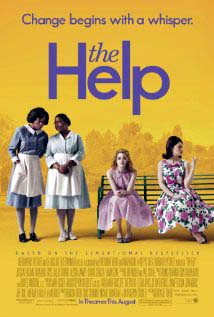 Based on the book by Kathryn Stockett, the film is set in Jackson, Mississippi in the early 1960s, and is about a young woman named Skeeter (Emma Stone) who returns home from college. Skeeter is determined to become a prolific writer, but when she sees how her white friends treat their black maids, she decides to interview them for a book that will chronicle the point of view of the maids. Soon, all hell breaks loose, as Skeeter realizes that her hometown isn't open to the idea of equality, as well as having their dirty laundry published for all of the country to read.

As I stated earlier, I was really surprised on how amazing the film was. I think that Emma Stone did a great job of portraying Skeeter, but the nominee for best actress in my humble opinion goes to Viola Davis, who's character Aibileen Clark is the catalyst for social change in the film. Aibileen is a poor, black maid that has seen enough and decides to aid Skeeter in her book. Davis' performance is riveting, poignant, and beautiful to watch. For best supporting actress, Octavia Spencer (Minny Jackson) for being Aibileen's partner in crime, and also for making her former boss eat her famous chocolate pie, to which she adds, "Eat my shit!" And speaking of Minny's former boss, actress Bryce Dallas Howard's performance as the antagonist Hilly Holbrook is one of the best and bitchiest villains of the year. Arrogant, self-righteous, and flat out racial bigot, Hilly goes to great lengths to keep segregation alive in Jackson.

THE HELP is an emotionally charged, funny, and inspiring film to watch. This film will also serve to remind us of how far this country has come. Equality for all was but a dream back in the early 60s, but that dream has become a reality. This film should inspire you to fight for what you believe in as well. Never forget who you are, and you will go far.

THE HELP is now playing in theaters nationwide, including at the Camera Cinemas here in the South Bay. To view showtimes, visit their website at http://www.cameracinemas.com

Posted by Philip Castor at 5:24 PM