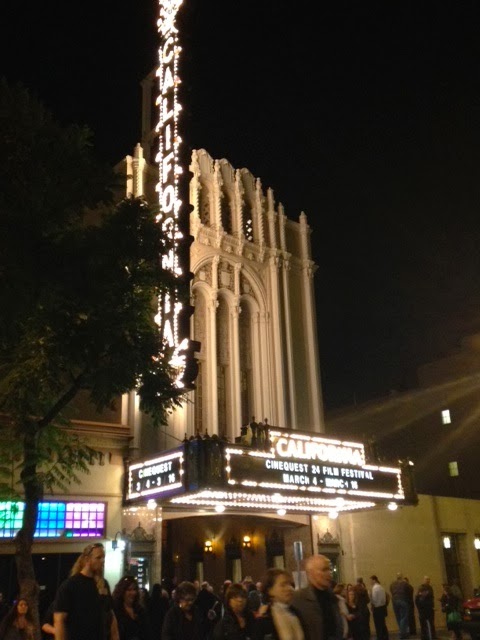 Ladies and gentlemen, the time has come! Tonight was the opening night of the Cinequest Film Festival here in Downtown San Jose! Once again yours truly is covering this momentous event, and like last year, I am expecting to see some of the very best in independent, foreign, and documentaries here for the next thirteen days! Once again I got to see some old friends like my good friend and fellow blogger Jason Wiener from Jason Watches Movies as well as Alison Murray, Christopher Garcia, Terra Wood-Taylor, Michael Rabehl, and a few others. At this year's festival I hope to once again make new friends and as well as new memories. And this year I am hoping to break my record attend 60 screenings in the next thirteen days, so let's see if i can pull this off!

The opening night was held once again at the beautiful California Theatre on South First Street. There was the traditional red carpet with numerous filmmakers talking about their films to the press and posing for the cameras. Soon I found my way to the front row where Jason and our good friend Roy from the Niles Essanay Silent Film Museum was saving me a seat. Around 7 o'clock the lights slowly dimmed and the show began!

The night began with a really funny and cute short film entitled RPG OKC, which is about finding true love in a 8-bit Nintendo game world! After the short, Cinequest screened this year's festival trailer that will be shown before each screening, which was made by the talented folks over at Guerilla Wanderers.

Then Cinequest director and co-founder and Halfdan Hussey came out and greeted everyone and thanked all out sponsors. He then introduced Eric Kohn, Chief Film Critic and Senior Editor for Indiewire, to receive the first ever Cinequest Media Legacy Award. Kohn then made a very quick speech about championing small independent films and how we all should support these fine little films! He mentioned some examples and Jason and I applauded after each one since we knew them, which made Kohn acknowledge us, which I thought was pretty damn cool!

Afterwards Halfdan then introduced Cinequest President and co-founder Kathleen Powell to introduce the recipient of the Maverick Innovator Award, the legendary Martin Cooper, the inventor of the cell phone, which took him 30 years to get off the ground! Afterwards, Halfdan once again welcomed back NBC Bay Area News Meteorologist Christina Loren to introduce the festival's opening film THE GRAND SEDUCTION.
The film is set in the quaint and quiet fishing harbor called Tickle Cove where its townsfolk have been collecting unemployment checks because all the fish are gone, forcing some to look for work in the big city. However, things start looking bright when a plastics manufacturer wants to build a factory in their town, but there's on catch: the town needs to have a local doctor. Frantic that they might lose their one chance of rebuilding their town, newly elected mayor Murray French (Brendan Gleeson) with the help of his best friend Simon (Gordon Pinsent) find Dr. Lewis (Taylor Kitsch), who has been recently "banished" to this seaside town. With the help from the rest of the townsfolk, Murray must convince Lewis to stay with them or else lose out on their factory contract.

Based on the French film La Grande Séduction by Jean-Francois Pouliot, this new version was directed by Don McKellar (LAST NIGHT, CHILDSTAR) and written by screenwriter Michael Dowse (TAKE ME HOME TONIGHT, GOON, THE F WORD). Both of these talented individuals really make the film very funny and charming to watch! McKellar does a great job of letting the camera capture the beauty and tranquility of Tickle Cove while simultaneously getting up close and personal with its residents. The laughs come calmly and with precise timing as to have the audience laugh at one joke at a time while not missing the next one being set up. Dowse does an excellent job of creating three dimensional characters that sweet, funny, and at times mischievous.

The cast itself is fantastic! Gleeson's Murray is tough as nails kinda guy that will do whatever he can to bring work to his town, even if it means lying to poor old Dr. Travis. Kitsch, who plays Travis, starts off as the arrogant, douchebag doctor who really deserves to have a "wake-up call" that runs his life around. But when he does fall in love with Tickle Cove, Murray and Simon begin to feel guilty because of their lies and deceit. And the townsfolk themselves all carry funny attributes that border on absurdity to the down right wacky! Overall, the film has some terrific acting here, folks!

The film comes to us from the Great White North, better known as Canada. Now at last years festival, I mentioned it looked like Canada invaded San Jose because there were so many Canadian films that it was unbelievable! But the reason there were so many last year was because they were all damn good! For a long time Canada was known for making some excellent and landmark horror films like RABID, MY BLOODY VALENTINE and PROM NIGHT, but now it looks like they'll be now know for their hilarious and heart warming comedies! And it looks like THE GRAND SEDUCTION will be keeping in good company now!

After the screening, we all headed over to the lavish after party, which was held over at the South First Billiards, where they was plenty to eat, drink, and music to dance to as well as pool tables galore! Food was catered by the fine people at Justin's and snacks were once again provided by Jen's Cakes located here in Willow Glen! Drinks were provided by Tito's Vodka and Stella Artois!! The party was completely off the chart!!


THE GRAND SEDUCTION was the perfect film to kick off Cinequest 24! Now you can partake in this very important film festival event. To view film schedules, information about the festival, and to purchase tickets and passes, visit their website at www.cinequest.org.

Thanks for reading, and enjoy the show!
Posted by Philip Castor at 9:58 AM