Phil attends a very special screening of RED STATE at the Camera 3-Sept. 25, 2011

When I first heard that director Kevin Smith's new horror film RED STATE was having a special one-night only screening at the Camera 3 in Downtown San Jose, I couldn't believe it! I was so damn excited, I shouted at the top of my lungs. I've heard so much about the film, and all the hype and controversy surrounding it. Smith's entry to the horror genre was a long time coming. According to him, it took about five years to bring the film to the big screen. After seeing the film tonight...well...let me just say this: THIS IS NOT YOU'RE TYPICAL KEVIN SMITH FILM!! This is something entirely different, and it is his best film to date!! 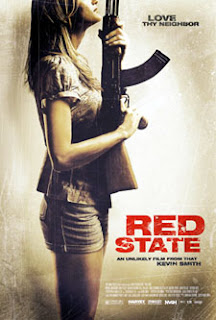 I did not see this film coming! I mean, were are talking about Kevin Smith here. The king of slacker films. For my generation, his films represented us and our lingo, our look, our thoughts, and our hang-ups. Films like CLERKS, MALLRATS, and CHASING AMY defined the demographic known as Generation X. We related to his films because they were about us! After the release of CLERKS 2, Smith closed the door on his View Askew universe and began making other types of films. The 2008 film ZACK AND MIRI MAKE A PORNO was a hilarious comedy hit, but his 2010 follow up film, the ill- fated comedy/buddy cop film COP OUT (starring Bruce Willis and Tracy Morgan) was a complete disaster. With RED STATE, he decided to go back to his roots and made a low budget ($4 million) horror film (his first horror film ever) and took it on a grassroots campaign tour from town to town.

Now, the film itself is fricking unbelievable! Think Quentin Tarantino meets John Carpenter. Smith abandons his usual style of directing, and plots a complete 180 course from what we expect from him. Terrifying close-ups, unnerving tracking shots, unflinching gore and graphic violence; everything that you weren't expecting Smith to do, he does beautifully! Smith stated that the film is loosely based on the infamous pastor Fred Phelps and his Westboro Baptist Church. He and his followers are known for picketing events such as gay pride events, military funerals, and for creating vulgar, hateful slogans. His most atrocious slogan being "God hates fags" garnered Phelps an avalanche of controversy. And yet, for some strange reason that I cannot comprehend, Phelps has not been assassinated. Explain that one to me folks!

The film boasts a fantastic cast, which credit goes to Smith for writing an amazing script. The first half of the film concentrates on Cooper and his believers and their perverted, twisted take on religion; a religion that when it says smite the wicked, they take it literally! Parks' performance of Cooper is spine-chilling and frightening, due to the fact that there are people like Copper out there, and they're responsible for some of the most vicious and ludicrous acts of violence and stupidity ever recorded in this country. (If you don't believe me, look up Jim Jones and the Jonestown Massacre) The second half has an incredible shoot out finale that Sam Peckinpah would have been proud of! Goodman is awesome as Agent Keenan, and also be on the lookout for a young actress named Kerry Bishe who portrays Cheyenne, one of the children of the religious cult. I first became aware of her from the television show SCRUBS. She portrayed med student Lucy Bennett, the lead character from Season Nine of the show. I loved her character, as well as her acting. I was so surprised to see her in the film, and she nailed her performance. I can't wait to see her again in another film.

After the screening, the theater streamed a live Q&A with Smith, who was at the New Beverly Theater in Hollywood. Smith answered fan's questions, which were twittered to him. Some guy next to me tweeted his question and Smith answered in real time. I tweeted my question, but I had to leave to type up this review. But I'd like to think he answered my question.

RED STATE is Kevin Smith's best film ever! A horrifying study of religious cults and bloody consequences make this my number one favorite horror film of the year! Why do you ask? Because this is real. This has happened before, and can happen again at anytime and anyplace. Maybe in the town where you live now.

RED STATE is now available to watch On Demand. Check your local provider for more details. The film will also be released on DVD and Blu-Ray on October 18th. Purchase a copy for yourself at http://www.amazon.com

Posted by Philip Castor at 9:51 PM