I was speechless. Absolutely speechless. I could not believe what I was watching, and at the same time, I couldn't turn away. That is the power of cinema my friends. For over a hundred years, the images that have flickered before of have entertained us, shocked us, surprised us, and enlightened us like no other art form has. The images we see are documenting the social climates, issues, fears, and humor; styles and behaviors of society of the times to which a film was made. Some of these issues are still relevant today. So with the second film I saw today CONTAGION, director Steven Soderbergh brings to light that a lethal airborne virus epidemic could very well happen in our lifetime, but it's the spread of fear that is much more contagious and deadlier. 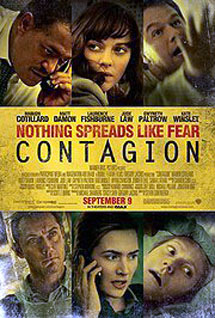 The film opens on Day 2 of the virus outbreak, following a very sick looking Beth Emhoff (Gwyneth Paltrow) at a Chicago airport as she travels back home to Minneapolis from a business trip in Hong Kong. She unknowingly spreads the virus to her husband Mitch (Matt Damon) and their son. We are also shown how others in Kowloon, Hong Kong, as well as London and Guandong fall ill from the virus.

At the Centre for Disease Control (CDC) in Atlanta, its executive Dr. Ellis Cheever (Laurence Fishburne) is alerted and immediately sends his Epidemic Intelligence officer Dr. Erin Mears (Kate Winslit) to discover how the virus started. Meanwhile, Dr. Leonora Orantes (Marion Cotillard) from the World Health Organization, flies to China and finds herself in trouble with the locals. As the day wears on, we see others participating during this crisis; conspiracy blogger Alan Krumwiede (Jude Law) takes advantage of the situation, while the CDC works against the clock to come up with a vaccination against the MEV-1 virus.

There's a lot going on in this film, but what I loved about the film is One: there is no real star of the film. Both Damon and Fishburne receive quite a bit of screen time, and Paltrow's presence in the film adds up to about 2 minutes. Second, the main character is the virus, and it's all about how everyone around it is affected by it, and how do they adjust to this situation that it has created. It's almost like a sick game of chess; moving each character as if it were a pawn. Another reason I enjoyed the film was the realistic steps and actions portrayed in the film that were used to combat the virus. The science of finding a cure, governmental laws and regulations, propaganda, fear tactics, paranoia, it all worked perfectly within the film.

CONTAGION is a major tour de force of brilliant filmmaking! I think it's a major contender for Best Picture at the Oscars next year. This film must be seen on the big screen, so rush out and see it before it is too late!

CONTAGION is now playing in theaters nationwide, including at the Camera Cinemas here in the South Bay.To view showtime, visit their website at http://www.cameracinemas.com

Thanks for reading, and enjoy the show!
Posted by Philip Castor at 6:22 PM