Yesterday in Huntington Beach, it was HOT! DAMN HOT!! The kind of hot that makes you melt! Now I thought being in HB, it wouldn't get that hot, being that it's near the Pacific Ocean. Nevertheless, it was hot yesterday! So searching for a way to beat the heat, I went to see the new British sci-fi film ATTACK THE BLOCK at the ArcLight Cinemas on Sunset Ave. 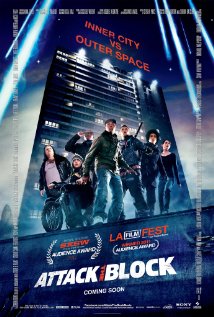 In this very clever film, a nurse named Sam (Jodie Wittaker) is heading back home in a shady neighborhood in Lower London when she is attacked by a local teenage street gang, led by a boy named Moses (John Boyega). After robbing her, they encounter a strange beam of light that crashes down and out comes a monstrous-looking alien. Naturally, Moses defends his turf and kills the alien, which brings the rest of them to his block. Now he must protect his gang and his block (as well as Sam who he turns to for help) from the alien invasion as well as from drug lord Hi-Hatz (Jumayn Hunter). And the only safe place is in the weed vault at their friend Ron's (Nick Frost) apartment.

The film was a fast paced, sci-fi/action, urban city invasion mesh-up that Hollywood could take a few notes from. Now Hollywood has made a couple of films with this kind of setting (the 1991 sequel PREDATOR 2 comes to mind), but it didn't have this kind of script, which is fast, funny, witty, and full of interesting characters. Now being a British film, you must get past the very thick accents and sometimes unpronounceable dialects. Now since I've been watching British TV shows and films since I was but a wee little lad, I understood what they were saying. To the typical American googleplex movie goer, it might sound like people talking with their mouth full of marbles. However, once you get past that slight hurdle, the film is a real treat and very entertaining.

This was the film debut for director Joe Cornish (who is one half of the cult broadcasting duo Adam and Joe) and the man hit it out of the park. He was able to blend two totally different genres together to create a fantastic film that, hopefully, will be embraced by fans who loved Edgar Wright's 2004 film debut SHAUN OF THE DEAD. The film contains that same British wit and humor and also has enough action and violence to satisfy horror fans. Plus throw in the "big alien gorilla wolf monster" creatures and you've got your sci-fi fix as well. Also, fans of Nick Frost, he has but a small part in the film, but when the camera is on him, he is hilarious!

The film also touches on some social issues that are taking place in Britain. Urban violence, drug issues, violence against women, and government housing are just some examples that I noticed in the film. Issues that we here in America know all too well. Again, kudos to Cornish for taking a chance with bringing to light these social topics.

ATTACK THE BLOCK is a smart, funny, action packed, urban, sci-fi thriller that really delivers the goods and then goes beyond that. So to all you fans of everything British, rush out and go see this movie, before the Queen has it deported back.

ATTACK THE BLOCK is playing at the Arclight Cinemas in Hollywood. To view showtimes, visit their website at https://www.arclightcinemas.com/ArcLight/faces/Home.jsp

Posted by Philip Castor at 9:49 AM