I was a big fan of Deadpool long before the first film came out. He was one of the most unique, funny, and original characters in the Marvel Comics Universe (which is ironic because he was a rip off of the DC Comic's character Deathstroke). So when DEADPOOL was released to theaters, I was also one of the first ones who saw it an immediately became one of my favorite films of that year. Fast forward to today and I'm back at the Cinelux Almaden Café & Lounge to see the highly  anticipated sequel DEADPOOL 2. 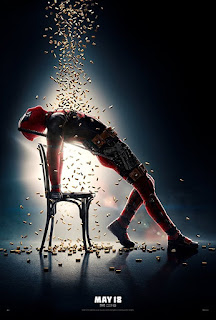 The film's official synopsis: After surviving a near fatal bovine attack, a disfigured cafeteria chef (Wade Wilson) struggles to fulfill his dream of becoming Mayberry's hottest bartender while also learning to cope with his lost sense of taste. Searching to regain his spice for life, as well as a flux capacitor, Wade must battle ninjas, the Yakuza, and a pack of sexually aggressive canines, as he journeys around the world to discover the importance of family, friendship, and flavor - finding a new taste for adventure and earning the coveted coffee mug title of World's Best Lover.

Dude, seriously, this was a hilariously fucking awesome movie! The jokes come fast (pun intended) and funny, the action is a hybrid of THE MATRIX and JOHN WICK, and it builds off what the first film established. It does what a sequel should do, and all this comes courtesy of screenwriters Rhett Reese, Paul Wernick, and Ryan Reynolds (yeah, that surprised me too) and the film's director David Leitch, who also helmed ATOMIC BLONDE and is the uncredited co-director on JOHN WICK. So, good job fellas. You guys made a lot of fanboys and fangirls very, very happy.

As for our players, they all knocked it out of the park! Reynolds brings his "A" game to out favorite "Merc with the Mouth", but this time, old Deadpool has some pathos and sympathy to go along with his wise cracking, fowl-mouthed, fourth wall breaking, ass kicking shenanigans. Josh Brolin IS Cable: the look, the voice, the mannerism, and is a badass all the way! Newcommer Zazie Beetz shines as the lucky mutant Domino, and does quite a bit of ass kicking herself. Returning actress Brianna Hildebrand is back as our favorite X-Men Negasonic Teenage Warhead, but now has a super awesome girlfriend Yukio (Shioli Kutsuna), who has a super cute friendship with Wade Wilson. Also back are Vanessa (Morena Baccarin), Weasel (T.J. Miller), Blind Al (Leslie Uggams), Dopinder (Karan Soni), and Stefan Kapicic as the voice as Colossus.

So, as always, there are end credit scenes, cause it wouldn't be a Marvel Film without end credit scenes. However, these are mid-credit scenes. There are two of them, and are fucking hysterically, gut busting fantastic!! After that, then leave the theater so you can go pee! There, I saved you five minutes of doing the "Pee-Pee Dance" in your seat.

DEADPOOL 2 is wickedly funny, outrageously funny, action packed, superhero comic book movie sequel you've been waiting for!! So shit your pants and call in sick for work, then change your pants and go see this bad boy before it comes out on Blu-Ray next week!! 5 out of 5 stars!! Highly recommended!!


DEADPOOL 2 is playing in 2D, Real 3D, and in IMAX in theaters nationwide, including at the Cinelux Theaters here in the Bay Area. To view showtimes, visit their website at www.cineluxtheatres.com.

Thanks for reading, and enjoy the show!
Posted by Philip Castor at 3:14 PM