Phil’s Horror Watch: NIGHT OF SOMETHING STRANGE (2016) from Hurricane Bridge Entertainment - May 3, 2018

Today's horror film has been garnering a lot of attention and acclaim. From Fangoria to Dread Central, its reputation has reached out all over the horror community. So far that, it was selected to be streamed on the horror streaming service Shudder back in February. Now that says something, however, I didn't see it on Shudder. Nope, I went and purchased a Blu-Ray copy for myself, and after watching it, I can honestly say that NIGHT OF SOMETHING STRANGE lives up to the hype! 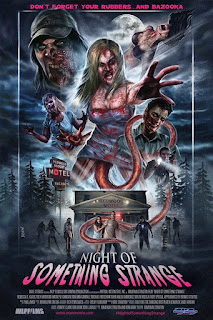 The film's official synopsis: Five teenage friends set out for the beach on their Spring Break vacation. Good times are cut short when one of the group, Carrie, contracts a deadly sexual transmitted disease during a bathroom stop. When they stop for the night at an isolated motel, the real terror begins when the STD virus starts running rampant, turning those infected into the living dead. However, there's more going on at the motel than meets the eye.

If there was ever a film that promotes that abstinence as well as the dangers of necrophilia, it's this film!

Writer/director Jonathan Straiton, along with co-writers Ron Bonk and Mean Gene, crafted one of the most insane, gory, fast paced, batshit crazy, darkly sexual, horror film I have ever seen! His set-ups and framing captures every joke, every bloodshed, every grotesque killing and he makes it look like a work of art! He doesn't shy away form the violence, sex, and gore; rather, he embraces the nuances and the spirit of independent filmmaking while catering to hardcore horror fans. It's his vision, he's artistic vision, that he bares on the screen, and so far, horror fans are loving it! And this was Straiton's directorial debut!! What a way to make an entrance!! I cannot wait to see his next film!!

The film's cast was another aspect that made the film so much fun to watch. Highlights for me were Rebecca C. Kasek and Trey Harrison's performances as Christine and Dirk, respectively. Both have great on-screen chemistry and I was rooting for them throughout the movie, which was a good sign. We, the audience, want to invest in our protagonists, and we we find ourselves emotionally invested in them. Toni Ann Gambale's character Carrie is one evil looking zombie, thanks to our main zombie antagonist Cornelius, played by Wayne W. Johnson.

And I would be remiss if I didn't mention the awesome looking special effects. Kuddos to special effects artist Colby Flinchum and Nicola Fiore for an astounding job! The actresses and actors looked great, the blood was plentiful, and the gore was sick looking!

As I said earlier, I purchased a signed Blu-Ray copy for myself on their website, and it has some very cool special features, such as: an informative Behind the Scenes feature entitled Making Something Strange, a hilarious Gag Reel, Filmmaker's Audio Commentary, Cast Auditions, and trailers to other independent horror films like THE BARN, SHE KILLS, and others. Also, you can purchase other cool memorabilia like tee shirts, stickers, buttons, key chains, posters, and iPhone cases!

NIGHT OF SOMETHING STRANGE is one of my favorite independent horror films of 2018!! It's amazing to see so much great horror films coming out of the indie scene!! We are seeing a renaissance in the horror genre, and here is another example of a movie that fans will be watching and talking about for years to come! Just make sure you don't have sex with any corpses. 5 out of 5 stars!! Highly recommended!!


NIGHT OF SOMETHING STRANGE is available on both Blu-Ray and DVD on the film's official website at www.nightofsomethingstrange.com. The film is also streaming on Shudder. To view it, sign up on its website at www.shudder.com.

Thanks for reading, and enjoy the horror!
Posted by Philip Castor at 8:42 PM