Phil sees SALMON FISHING IN THE YEMEN at the Camera 7 at the Pruneyard Campbell-April 14, 2012

This past weekend I headed off to the Camera 7 in the Pruneyard Campbell to get caught up on all the recent films I've been missing due to my very hectic day job. The first film I saw was SALMON FISHING IN THE YEMEN, directed by Lasse Hallstrom (Dear John, The Cider House Rules, Chocolat, Casanova) and starring Ewan McGregor (STAR WARS prequels, BEGINNERS, HAYWIRE), Emily Blunt (THE MUPPETS, THE ADJUSTMENT BUREAU, THE WOLFMAN) as well as Amr Waked, Kristin Scott Thomas, Rachael Stirling, and Tom Mison. 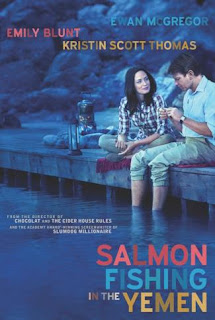 Based on a novel of the same name by Paul Torday, the film's about Dr. Alfred Jones (McGregor), a British government expert in fisheries who's life becomes more interesting when a consultant named Harriet Chetwode-Talbot (Blunt), representing a wealthy Yemeni sheikh (Waked), asks for his help to fulfill the sheikh's vision to introduce salmon fishing to the desert country of Yemen, Fred rejects the idea as unfeasible. Eventually as he spends more with the sheikh, the more the idea becomes "theoretically possible." Then life becomes even more interesting when Dr. Jones begins to develop feelings for his lovely assistant Miss Chetwode-Talbot. Throw in a terrorist plot to destroy the project and Dr. Jones' world begins to unravel.

I wasn't sure what to expect when I walked into the screening for this film. However I was very surprised at how well made the film was. It helps to have a great script and screenwriter Simon Beaufoy (SLUMDOG MILLIONAIRE, THE FULL MONTY) wrote a funny, heartfelt, and uplifting script. With Hallstrom in the director's chair, we are given a visual treat as we get to see the beauty and wonder of the Yemen. It's landscape, its people, and its culture unfold before our eyes. We also get to see some other amazing scenic wonders like a English castle and a lot of salmon!

Bringing life to a script is no easy task. It can either make or break a film. Fortunately in this film, both McGregor and Blunt give outstanding and grounded performances. The realistic acting between these two gives their on screen relationship a level of believability and realism. It's cute to watch these two go from disdain for one another to becoming colleagues and later on a couple. Also worth noting is the character of PR whiz Patricia Maxwell (an over-the-top Kristin Scott Thomas) who provides the majority of comic relief in the film. However that is not to say the McGregor hasn't got any funny lines. With his proper English accent, his humor is more dry and carefully placed so to make you smile when needed.

SALMON FISHING IN THE YEMEN is so far the best feel good movie of 2012. If you want to see a well made, well crafted, well acted film that will make you leave the theater with a big 'ol smile on your face, then this is the film for you. Four out of five stars!


SALMON FISHING IN THE YEMEN is currently playing in theaters nationwide, including at the Camera Cinemas here in the Bay Area. To view showtimes, visit their website at www.cameracinemas.com.

Thanks for reading, and enjoy the show!
Posted by Philip Castor at 10:41 AM