OK so I mentioned previously that during the San Francisco International Asian American Film Festival that the screening of VIETTE was sold out. Luckily, I met the film's writer, actress Mye Hoang in between screenings and I was able to purchase a signed copy of her film on DVD. So I finally got around to watching it and all I have to say is that I wish I was able to see this film on the big screen. 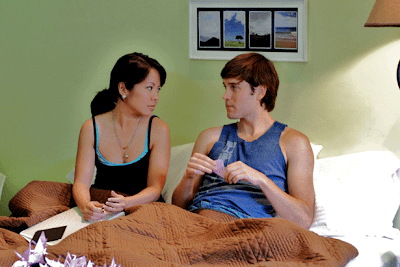 In the film Hoang portrays Viette, a young Vietnamese girl who lives with her very traditional and very strict parents. But add to this equation is her very scary father (Chi Pham from the Cinequest 20 film ALL ABOUT DAD) and it only adds more stress for her. She secretly has a white boyfriend that if her parents ever found out, all hell would break loose. However (SPOILER ALERT PEOPLE!) her folks do find out about her secret love and we see her father literally explode with anger and disgust. However as time passes Viette discovers that her boyfriend isn't all that he says he is and their relationship begins to unravel.

The film is very different than your average coming of age story. It's filled with teenage lust, hopes and dreams, as well as agony, hardship, and isolation. Hoang's screenplay is based on her own life experience, with some dramatized situations. But on has to wonder what was real and what made up for the film! Hoang is absolutely riveting in the film and her direction is sharp and precise. However the one flaw I had with the film was that while it took place over the course of several years, there were no time statements, such as "One Week Later" or "6 Months Later" or "One Year Later." This would have helped with the time lapses between certain scenes, but this in my only minor grip.

Overall VIETTE is an astounding and emotional film that really captures teen angst and rebellion as well as introducing us to one of Asian cinema's newest voices! The film will be screened at the 2012 LA Asian Pacific Film Festival May 10th-20th. So if you live in Southern California, make sure you see this film! Also you can visit the film's official website at http://undertowpictures.com/.

Thanks for reading, and enjoy the show!
Posted by Philip Castor at 6:14 AM