The second film I saw that Saturday was the documentary BULLY (originally titled THE BULLY PROJECT). Now if may remember I saw this film this past March during the Cinequest 22 Film Festival. However since I really liked this film and with all the controversy surrounding the film and the MPAA, I wanted to show my support of the film and see it again. 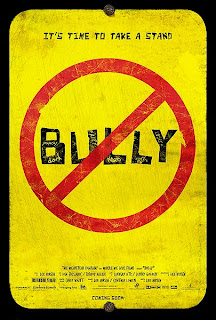 This powerful and disturbing film follows five kids from Texas, Georgia, Oklahoma, Iowa and Mississippi who are victims of bullying as well as their families. Filmed during the 2009-2010 school year, we see the ramifications of bullying and how some schools ignored the problem, which caused some students like Tyler Long and Ty Smalley (their families are focused in the film) to commit suicide. We are granted access to classrooms, school buses and cafeterias and we see first hand how bullying is running rampant in today's schools.

The initial impact the film had on me when I saw it the first time was still there during this viewing as well. As I stated, children go to school to learn and to be safe and protected while their parents are at work. After seeing what actually goes on, I was totally surprised at just how bad this problem has become. The film will touch your heart, and will make you want to look more closely at the schools your kids go to.

Director Lee Hirsch really captures the living Hell that these kids go through every single day of their school year. Now I saw my fair share of bullying back in my younger days, but it was in no way was it ever like this: brutal, vicious, and just disturbing to behold.

After the film was finished, the bullying was just beginning for Hirsch and the film. When it was submitted to the MPAA for a rating, it originally received an R rating, due to the coarse language in the film. Then on On February 27, 2012, Katy Butler of Ann Arbor, Michigan created a Change.org online petition to get the film changed from an "R" to a "PG-13" rating. Even after collecting more than 300,000 signatures, the MPAA still refused to change the film's rating. On March 26, 2012, The Weinstein Company announced that it would release (the film's distributor) would release the film unrated, in protest at the MPAA's decision. This would mean that the film would only be shown in art-house and independent movie theaters such as AMC, CineMark, and, of course, the Camera Cinemas.

So here we are, and the film BULLY is now playing unrated for all of you to see. BULLY is one of the most important documentaries that you and your family must see! See it with your kids, and then ask them if this is happening to them or to their friends. If so, take a stand and say "NO" to bullying in schools. Five out of five stars! Highly recommended!!


BULLY is playing in select theaters nationwide, including at the Camera Cinemas here in the Bay Area. To view showtimes, visit their website at www.cameracinemas.com.

Thanks for reading, and enjoy the show!
Posted by Philip Castor at 11:49 AM