Documentaries are my second favorite type of film genre (the first being horror).This past weekend I was fortunate to see a documentary that has been a long time coming. One of the best rock docs I've seen in a while, the film MARLEY chronicles the incredible life, the amazing music, and the tragic death of reggae icon Bob Marley. 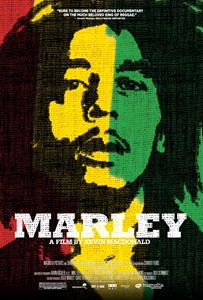 The film charts his life from his humble beginnings in a small country village without electricity and hope, through his rise to fame in Jamaica, to his exile in London, subsequent return to his Island of birth and eventual death at the age of just 36. Director Kevin Macdonald (STATE OF PLAY, TOUCHING THE VOID) crafted a film that has taken years for it to come to the big screen. Rumor has it that at one point Academy Award winning filmmaker Martin Scorsese was tied to direct the film which proves two things: One that Macdonald had some mighty big shoes to fill and second being that Bob Marley's life was begging to be told. Now this isn't you average, cookie-cutter, VH1's Behind The Music feature. Macdonald digs deep to uncover not only the legacy of Bob Marley, but what kind of person he was. The story is told using achieve interviews with Marley himself but mostly through interviews with his friends, family and ex colleagues who are still living. Some of the interviewees are great characters and speak with wisdom. Others are hilarious and most have a fantastic Jamaican Patois which is delightful to listen to. The film also gives some background to Rastafarianism, and the whole film is backed with over sixty Marley and Bob Marley and the Wailers songs which start with the song he first recorded aged sixteen and ends with One Love.

But what I found most exquisite and painful about the film was how Macdonald displayed the final year of Marley's Life. With his cancer diagnosis, travel to Germany for treatment, having going through Chemo sessions which resulted with him becoming bald and losing his trademark dreadlocks, to being hospitalized in Florida, surrounded by his family. This ending comes complete with long lost and never seen photographs and news footage that made this reviewer shed several tears. As mush as we talk about Bob Marley, listen to his music, seeing his face on everything from T-shirts to energy drinks, we often forget that he was a real human being; a man who came from very humble beginnings to become a voice of peace, love, and humanity. This is what I took home with me after the screening.


MARLEY is an extraordinary documentary about an extraordinary man who made a difference in the world. Through his activism, spirit, and of course, his music, Bob Marley will always be talked about, even after his death some 26 years later. His legacy is still remembered, and thank goodness we still have his music to listen to; to inspire us, to challenge us, to remind us that one person can make a difference in this world. Five out of five stars! Highly recommended!!

MARLEY is currently playing in select theaters nationwide, including at the Camera Cinemas here in the Bay Area. To view showtimes, visit their website at www.cameracinemas.com. The film is also availavbe on Video On Demand. Check your local provider to see if you can view this powerful film in your area.

Thanks for reading, and enjoy the show
Posted by Philip Castor at 5:07 PM