Phil sees WHAT TO EXPECT WHEN YOU'RE EXPECTING at the Camera 7 Pruneyard Campbel-May 26, 2012

It's been awhile since I've seen what has been dubbed a "chick flick." The last one I saw was the dismal THE VOW back in February. So for today I went and saw WHAT TO EXPECT WHEN YOU'RE EXPECTING, the newest film by director Kirk Jones. Starting and ensemble cast, the film explores that wonderful of pregnancy, and all the ups and downs that go along with it. And it's really funny as well. 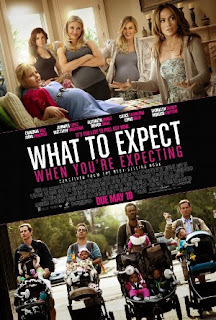 Based on the New York Times bestseller of the same name by Heidi Murkoff and Sharon Mazel, the cast is a who's who in Hollywood; each having their own pregnancy story to tell. Wendy (Elizabeth Banks) is a self-help book author and pregnancy "expert" who has never been able to get pregnant herself. But after four years of trying, she and her husband Gary (Ben Falcone) are finally having a baby. However,  Gary's ex-race car driver dad Ramsey (Dennis Quaid) trumps them by announcing his much younger trophy wife Skylar (Brooklyn Decker) is expecting twins. TV fitness guru Jules (Cameron Diaz) is now pregnant thanks to her new boyfriend and former "Celebrity Dance Factor" partner Even (Matthew Morrison of TV's Glee). Twenty-something and food truck cook Rosie (Anna Kendrick) becomes pregnant after a one-night tumble with her old high school flame and also food truck cook Marco (Chace Crawford). Married couple Holly (Jennifer Lopez) and Alex (Rodrigo Santoro) are trying to adopt because of Holly's "bad eggs." On the verge of their adoption, Marco gets cold feet, which prompts Holly to send him off to join a "dudes group," which is group of fathers, led by Vic (Chris Rock), who take their babies for walks in parks.

The film is funny from beginning to end, but it's also touching as well. We see the hardship that Holly must go through to adopt a child, and we see her sadness in her face as she sees other couples with their children. Of course taking pictures of expecting mothers doesn't help either, especially if one of those mothers is Skylar. And speaking of Skylar, even though she's carrying twins, she doesn't show the same pregnancy symptoms as Holly is suffering from. And the competition between Gary and his racing legend old man Ramsey only adds to the stress of the ladies.

Chris Rock is hilarious as Vic, who gives some great and funny advise to new dad-to-be Alex. When Alex mentions that he and Holly are just "looking" at houses, Vic states that, "Women pretty much control the baby universe, so yeah, you're buying a house, yeah, you're deferring on every major decision regarding the baby. And yeah, babies "are where happiness goes to DIE." Yes, it's all played for laughs!

The film is in the same vain as the other multi-star cast films, such as HE'S JUST NOT THAT INTO YOU, VALENTINE'S DAY and last years NEW YEAR'S EVE. Director Jones (EVERYBODY'S FINE, WAKING NED DIVINE, and NANNY McPHEE) balances all these Hollywood celebrities and everyone gets equal amount of screen time and get the audience to care for them, as well as make them laugh.

Overall, WHAT TO EXPECT WHEN YOU'RE EXPECTING is a fun, light-hearted comedy that doesn't do anything but keep you entertained. If you're a parent, or an expecting mother, then you'll love the film. Three out of five stars.


WHAT TO EXPECT WHEN YOU'RE EXPECTING is currently playing in theaters nationwide, including at the Camera Cinemas here in the Bay Area. To view showtimes, visit their website at http://www.cameracinemas.com.

Thanks for reading, and enjoy the show!
Posted by Philip Castor at 4:23 PM