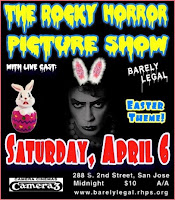 So for the fifth and final movie on Saturday, I participated in a midnight tradition that has been going on since 1975. Over at the Camera 3 in Downtown San Jose, I once again attended the midnight screening of THE ROCKY HORROR PICTURE SHOW. And as always, my friends from Barely Legal Productions were there to bring the film to life! Plus, this was the special Easter Show! Joining me on my trip were my good friends Krista and her boyfriend Joe. The show is presented by The Camera 3 Cinemas and by Psycho Donuts and it features the cast of Barely Legal Productions!!

The Camera 3 lobby was packed full of people, mostly young teenagers and college students, and some of them have never been to a midnight ROCKY screening before! Mmmmm.......I smell virgins! To my surprise, Krista and Joe were also a virgins! OK I knew that tonight was going to be a lot fun! 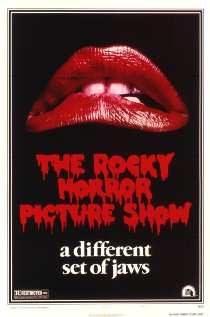 After the theater was filled, the show began! As always, our host Nate McHavoc was our emcee (and Riff Raff) for this special Easter show. He had all the virgins come up and do the butt dance (there were A LOT of virgins), and then sent everyone under 18 years old back to their seats. Those who remained had to answer a his traditional contest which involves taking a basket, "And putting it between your legs." Now remember, this was the special Easter show, so the games involved Easter eggs and baskets. And of course, Krista was part of it all! I was so proud of her!

Since this was Easter show, some of the cast members wore Easter costumes during the show. But the best costume was Nate's GIGANTIC EASTER BUNNY costume that he wore during the grand finale of the film! It was hilarious! OK here's a little SPOILER. So for those who haven't seen the film yet (and shame on you if you haven't!), skip this part and go to the end. So in the final scene of the film were Riff Raff and Magenta confront Dr. Frank-N-Furter, there dressed in their alien garb. So naturally, the shadowcast does the same thing. But when Nate instead came out in the bunny costume, I almost died laughing! And what made it even funnier was that Nate just popped his head up and down to make it look like he was talking along with the movie! The whole audience was just laughing and cheering! Yes folks, fun was had by all! 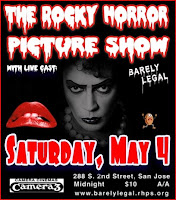 After the screening, my friends and I kept the party going by heading over to IHOP down on N. First Street. Both Krista and Joe had a blast at the show, and both wanted to attend the next month's show. I gotta say, tonight was an awesome night!

So another great midnight screening has come and gone. The next Barely Legal will be Saturday, May 4th so come on out and join in on all the fun! To learn more about future shows, and how you can become a cast member, visit their website at barelylegal.rhps.org.

Thanks for reading, and enjoy the show!
Posted by Philip Castor at 5:03 PM