For years I was a big fan and supporter of the Camera Cinemas' Midnight Movie series. From May til the end of September, they would show popular, cult and horror films at midnight every week at two locations: The Camera 7 Pruneyard on Friday night and the Camera 12 on Saturday night. For over six years I would be there, winning prizes and watching some true film classics such as EVIL DEAD 2, THE PRINCESS BRIDE, THE PROFESSIONAL, and REPO:THE GENETIC OPERA. This past February it was reformatted and rechristened as the Cult Movie series. Now they show films once a month at the Camera 3 in downtown San Jose, and it now continues until November. For month three of the series, they showed one of my favorite films of all time. I'm talking about the 2001 indie cult classic film GHOST WORLD. 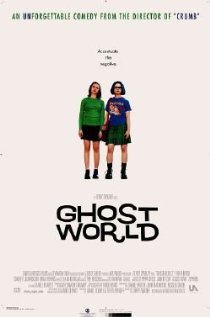 Directed by Terry Zwigoff, and based on the comic book by Daniel Clowes (who also wrote the screenplay along with Zwigoff), the film's about Enid (Thora Birch) and Rebecca (Scarlett Johansson), two social outsiders who, after graduating high school, embark on playing practical jokes on their friend Josh (Brad Renfro) and on their new subject Seymour (Steve Buscemi), who is also a social outsider, just a lot older. Eventually Enid's world is turned up side, as her friendship with Seymour evolves and Rebecca's deteriorates.

I saw this film when it first came out back in August of 2001. It played for a couple of weeks at the now defunct Camera One on First Street in downtown San Jose. Fast forward to 2011 and the film still holds up to its depiction of that moment in time right after you graduate. The world is wide open, as well as your future. There are so many decisions to make and they're all wrong. How I miss the naivety of my youth.

Of course I never had this much fun as Enid and Rebecca do though. Both Birch and Johansson's performances were spot on. Casting did an amazing job snagging these two actresses. They really did look like their comic book counterparts. However I, and many other critics did as well, thought that Birch was going to become the biggest star of all time. I don't think anybody saw Johansson breaking out like she did. Hard to believe that just two years later, she would star, along with Bill Murray, in director Sophia Coppola's indie smash LOST IN TRANSLATION. Now Johansson is starring in major movies, while Birch starred in a number of TV movies like 2003's HOMELESS TO HARVARD, and small indie films such as DARK CORNERS and DEADLINE. In my opinion, I think Birch was robbed of her stardom.

The film's dark humor is just hilarious, and Zwigoff's directing brought the comic book to the big screen perfectly. It also helped that Zwigoff was already a fan of Clowes. This was, and still is, one of my favorite films that he has directed.

It was fun taking a stroll down memory lane. And that's what so great about movies. It takes you back to a time when life was simpler, and all the good times that you had. When you watch a movie, you can remeber where you were the first time you saw it, how old you were, where you were in your life, and what was going on in the world. There are not too many mediums that have that kind of power to take you back in time. And with GHOST WORLD, I'll always have those memories.

Thanks for reading, and enjoy the show!
Posted by Philip Castor at 11:16 PM