My quest of watching Bollywood movies continues with today's film. An action packed, spy film starring the love of my life Kareena Kapoor, AGENT VINOD is ode to classic Bond films while simultaneously forging an identity for itself. Doesn't it succeed? Yes and no. 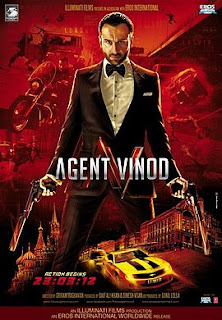 According to the film's official website, "The story begins with a series of seemingly unconnected events. In Uzbekistan, Anex KGB officer is tortured and murdered. In Cape Town, a group of international business tycoons discuss a rumor that the dead KGB officer had a nuclear suitcase bomb hidden away. In Moscow, an Indian secret agent is exposed. The agent is shot dead while trying to send a code red message to India. In India, the head of R.A.W. sees the incomplete message. All it contains is a number 242. Enter Agent Vinod. Vinod (Saif Ali Khan) is the kind of agent who first kicks the door open and then finds out whats behind it. His unconventional approach puts him in dangerous situations, but he manages to get the crucial leads. A series of twists and turns take Vinod across the globe: from Marakkesh to Riga, Karachi to Delhi and finally London where he discovers the ultimate conspiracy."

The film is very entertaining and Khan is terrific as the no nonsense Agent Vinod: tough, strong, amazing martial arts expert, can fire a gun like no other, and looks great in a suit. The only thing missing are the James Bond gadgets! Kareena Kapoor (CHAMELI, RA.ONE, JAB WE MET) portrays his love interest, but what's interesting is that throughout the film, you don't know which side she's one. She has many alias: Iram Parveen Bilal, Dr. Ruby Mendes, and Josie. She's the wild card in the film, which has enough twists and turns to keep the audience guessing as to who is the mastermind this elaborate and diabolical scheme of world wide war. Also Kapoor looks breathtaking in her red satin dinner dress!

Director Sriram Raghavan does a fine job of directing the film, and the action scenes all contain that "on the edge of your seat" excitement. There's one particular scene where Vinod and Jamie are engaged in a shoot out in a hotel bar, and it shot and paced so fluidly that it looked like it was shot in one take! Clearly Raghavan took a page out of the Martin Scorsese book of directing.

Along with the action scenes, the musical dance numbers were also sublime! The main song comes in the middle of the third act when both Kappor and Saif Ali Khan perform during the song "Dil Mera Muft Ka." Both ladies look absolutely gorgeous in their scene together!

All this aside, the film does drag on a bit too long in certain parts of the film. Plus some of the storyline became too hard to follow, as many new characters were introduced before I could get an handle on the ones I already saw. And some of the characters were not fleshed out enough for me to care. I know that Vinod is no nonsense agent, but sometimes I felt he was a little two-dimensional, which made him fall flat at times. But these are some of my minor complaints about the film, but these were most noticeable.

The movie borrows its name from the 1977 film of the same name, which begs me to wonder if this was a remake (since there was already a film called AGENT VINOD, I vote this film as a remake even though the two films have very different stories). But this is only one part of the film's many controversies, The soundtrack boasts some excellent vintage Indian songs, but according to Wickipedia, "Reports said that the film featured songs from older films, without acquiring prior permission from the producers. The owners of these songs were not credited in the film. Saif Ali Khan however paid for the rights later, and explained this to be a last-minute co-ordination problem." Also the film was banned in Pakistan as it made references to a section of ISI's involvement in Jihadi groups and terror activities. When the film was releases in India on February 22, 2012, it was panned by the critics and film fans. By the end of its worldwide theatrical run, it was officially declared a box-office failure.

Even though flawed, AGENT VINOD is still an action packed, spy-filled rollercoaster ride of a film! While not perfect, it is still entertaining and sure to get your blood pumping. So in my humble opinion, it worth checking out. 3 1/2 out of 5 stars!


AGENT VINOD is currently available on DVD from Eros Entertainment. To purchase a copy, visit their official website at http://dvdstore.erosentertainment.com.

Thanks for reading, and enjoy the show!
Posted by Philip Castor at 8:25 PM