This past Sunday I ventured back down to the Camera 3 where my friend and local documentary filmmaker Tom Wyrsch was screening both his films REMEMBERING PLAYLAND AT THE BEACH and SUTRO'S: THE PALACE AT LAND'S END. Also at the theater were my friends Strephon and Heather Taylor from November Fire Recordings selling DVDs of Tom's films as well as posters, buttons, keychains and all other kinds of cool stuff. 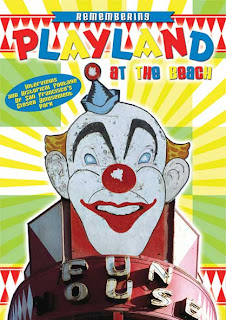 The show began with the Camera 3 manager Chris introducing Tom to the stage, where he talked briefly about the film and what we can expect. REMEMBER PLAYLAND AT THE BEACH is a full length documentary about the San Francisco's famed 10 acre seaside amusement park. From 1928 til it closed in 1972, Playland was dubbed the "The Coney Island of the west coast" and rightfully so. The park was home to many great rides and attractions, such as the Skyliner, Rocketship, Big Dipper, Big Slide, Dodgem (bumper cars) Limbo (dark house), Kookie Kube, Dark Mystery, the Mad Mine (a dark ride that literally covered over Dark Mystery), Scrambler, Twister, Kiddie Bulgy. Another favorite was the Diving Bell, a metal chamber that took guests under water and then returned them to the surface with a big splash. But by the late 1960s the park's glory days were a thing of the past, and it soon grew to a state of decay. It was eventually sold to Jeremy Ets-Hokin (a millionaire developer) in 1971 and it was torn down on September 4, 1972. Condominiums now reside on the property.

After the screening, Tom came out and participated in a Q&A with the audience. After about fifteen minutes, it was time for the next film. Now for those of you who keep up with my reviews, you may remember that I saw SUTRO'S back in July at the Niles Essanay Silent Film Museum. But for those you may not have read it, here's what I said about SUTRO'S: THE PALACE AT LAND'S END: 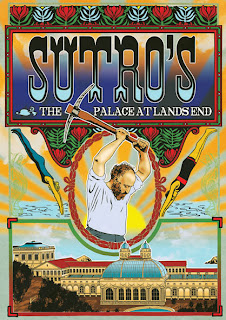 The documentary told the history of the great Sutro Baths and Museum, which was erected in the late 19th century. It was the world's largest swimming pool establishment, and soon it gained an extravagant museum that made people flock to the "palace at land's end." Sutro contained an astounding seven swimming pools, an ice skating rink, an Egyptian Mummy and Torture Museum, a Tom Thumb exhibit, Sutro Railway, Merry Way, Sutro's Cliff House, and other novelties and exhibits that had people coming back again and again until a fire in 1963 and 1966 destroyed the building, leaving only some of the foundations, which are now referred to as the Sutro Ruins. These ruins are still visible to this very day.

Again after the screening Tom came back out and conducted another great Q&A session. He also mention that he is about to begin editing on his latest documentary of another historic San Francisco landmark: the Cliff House restaurant that will close out his "trilogy."

It was great to see all my friends again, and I was very pleased by the great turnout for both these screenings! Now in case you were not able to attend the show, fear not! Both these great documentaries are available on DVD at the November Fire Recording's website. To purchase a copy, please visit their website at www.novemberfire.com. To view showtimes for other films at the Camera Cinemas, visit their website at www.cameracinemas.com.

Thanks for reading, and enjoy the show!
Posted by Philip Castor at 4:32 PM