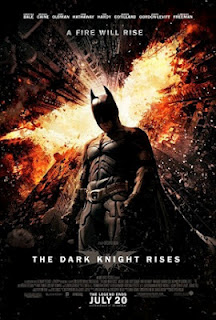 Yes my friends, I went and saw THE DARK KNIGHT RISES once again. This is my second time I've seen the film. Reason being is that it's a damn good movie! Hopefully all of you out there have already seen the film. If not, you are missing one of the best films of 2012! Also it's one of the best superhero films as well. What director Christopher Nolan did for the Batman franchise is unbelievable. By combining social issues, setting it in the real world, and dealing with real world topics, the films transcend the notion of what comic book movies should and could be. So do yourself a favor, go out and see this film!

THE DARK KNIGHT RISES is now playing in regular and IMAX theaters nationwide, including at the Century Theaters here in Bay Area. To view showtimes, visit their website at http://cinemark.com.

Thanks for reading, and enjoy the show!
Posted by Philip Castor at 11:50 AM