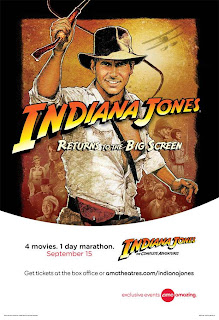 Hello everybody and welcome back! So this past Saturday I attended an extraordinary event! For one day and one day only, at select AMC Theaters, there were having an INDIANA JONES MARATHON! That's right people! How cool was this?!? With the release of the INDIANA JONES: THE COMPETE ADVENTURES Blu-Ray Boxset coming out on September 18th, Paramount Pictures teamed up with AMC Theaters to have all four films shown one last time on the big screen! And yours truly wasn't gonna miss out on this major movie event. So I showed up at the AMC Mercado 20, bought my movie pass (it was the shape of the idol from the first film!), received a cool collectable poster, bought a ton of food at the snack bar, found an excellent seat, and had the best damn Saturday of my entire life!

Usually I like to give a brief synopsis of the films I see, but everyone has seen the INDIANA JONES series. Now if by chance, you have NOT seen any of these movies yet, then GET OUT OF THAT CAVE YOU HAVE BEEN HIDING IN! These films are some of the best action/adventure films of the past twenty years! And now with the Blu-Ray boxset coming out, you have no reason for not seeing these films!

THE INDIANA JONES: THE COMPLETE ADVENTURES will be released on September 18th. To purchase a copy for yourself, visit your local retailer of on the Amazon website at www.amazon.com.

Thanks for reading, and enjoy the show!
Posted by Philip Castor at 7:42 PM