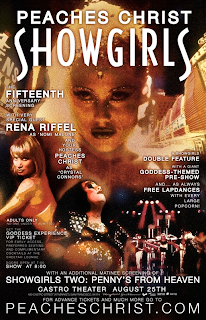 As soon as the Saturday afternoon screening of SHOWGIRL'S 2: PENNY'S FROM HEAVEN was over,  I couldn't wait for the party to continue at the world famous Castro Theatre. Let's face it, nobody throws a party better than Peaches Christ! And so, later that night, my friend Jennifer and I attended the 15th Anniversary screening of SHOWGIRLS! To make this event even more outrageous, Peaches had none other than Penny herself, Rena Riffel as the special guest! After Jennifer and I had lunch at our favorite hangout Orphan Andy's, we made our way back to the theatre just in time to be let in!

The festivities began at 7pm when Jennifer and I headed up to the mezzanine, where we had our fill of very tasty cocktails that were very strong and very tasty. Jennifer and I partied like rock stars, mingling with some the city's most famous drag queens. Soon the theatre let the crowd enter, and soon it was madness. At eight o'clock there wasn't an empty set in the house, and her Majesty Peaches Christ took the stage!

Peaches (as the evil Crystal Christ) began with a fantastic musical number from the film, and the rest of her "Showgirl Dancers" took the stage and the audience was treated to an elaborate dance number. During the middle of the routine, coming from the back of the theatre, being carried towards the stage was the beautiful Rene Riffel as Nomi Hope. After that, Rena, Peaches and her team did a reenactment of some scenes from the film. After that, the show continued with a contest for best costume. At the conclusion of the contest, it was time for the "Night of a 100 Lap Dancers" to commence! Members of the audience had to sign up to participate in the event, to which she called up every single one of them. Her Showgirl Dancers also helped out as well. So people who had purchased a large popcorn received  free lap dance, and that's when all hell broke loose! People were climbing all over seats, gyrating pelvises where everywhere, old people and young were giving it their all as the orgy of lap dancers continued for several minutes. (If you wish to see the craziness, I have photos of the show on my Facebook page, so head on over and check 'em out) After it was all over, it was time for the movie to begin! The film stars Elizabeth Berkley as Nomi Malone, a young and beautiful drifter who arrives in Las Vegas to become a dancer, but ends up as a stripper at the aptly named Cheetah Club instead. She meets a seamstress from the Stardust Hotel named Molly (Gina Ravera) and soon the two become fast friends. When Nomi encounters a chance meeting with the star of Molly's hotel show Goddess Cristal Connors (Gina Gershon), she manages to get an audition to be on their chorus line. Soon life becomes more complicated as Cristal sees Nomi as a threat to her and to her career as the star of the show, which creates a love/hate friendship between the two. Also Nomi sets her eyes on Cristal's manager and part time lover Zack Carey (Kyle MacLachlan) and the two of them become lovers as well. Eventually Nomi wonders if all of this stardom is worth the price.

Even before the film's original release, there was so much controversy surrounding the film. It was the first to receive the new NC-17 rating. It would also be Berkley's chance to shed her good girl image she had while playing Jesse from the Saturday morning TV show SAVED BY THE BELL. The abundant nudity throughout the film had the censors rioting in the streets. So when the film opened on September 22, 1995, it was an immediate bomb. However, like a lot films, it was ahead of its time, and found new life as a cult classic, being shown at midnight shows all across America. 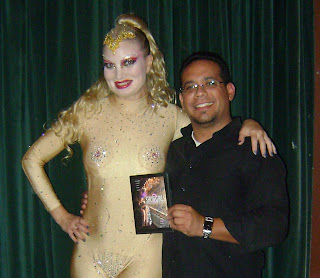 Right when the film began, I made my way back up to the mezzanine and waited in line to meet both Rena and Peaches. To my surprised, I was the first one in line! After waiting for about ten minutes, both stars came out and autographed photos, T-shirts, posters, and DVDs. Yours truly had Rena sign my DVD copy of her film SHOWGIRLS 2! After the movie, Jennifer and I took a pic with Peaches herself! Overall, that night was one exciting night!

Another fantastic Peaches Christ show has come and gone! But don't you fret my friends! There's plenty more fun ahead! In fact, The next PC show will be on October 12th at the Castro, where she will be screening the 1992 Robert Zemeckis film DEATH BECOMES HER. So make sure you come check that show out! And if you are interested in becoming a fan of Peaches Christ, or want to view her upcoming shows, visit her website at http://peacheschrist.com. To view the Castro Theater's film schedule, visit their website at www.castrotheatre.com.

Thanks for reading, and enjoy the show!
Posted by Philip Castor at 5:26 PM