Phil sees THE AVENGERS one last time at the AMC Mercado 20-September 7, 2012 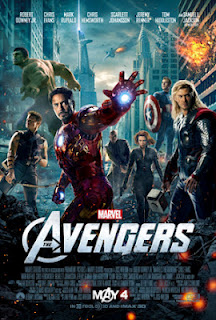 So during Labor Day weekend, Disney re-released THE AVENGERS back in theaters one last time before they release it on Blu-Ray and DVD on September 25th. So this past Friday night, my good friend and fellow film buddy Jennifer and I decided to head out to the AMC Mercado 20 to catch the late screening of the film!

I have now officially seen the film four times! And it's keeps getting better folks! Plus seeing how that this would be the last time I get to see the film on the big screen, I didn't want to miss this opportunity to relive the excitement one last time! So don't you folks miss out on seeing it in theaters again! Go out now and see it the way it was meant to be seen!

THE AVENGERS is currently playing at select theaters nationwide, including at the AMC Theaters here in the Bay Area. To view showtimes, visit their website at http://www.amctheatres.com.

Thanks for reading, and enjoy the show!
Posted by Philip Castor at 12:37 AM