Phil attends a very special screening of BEAUTY IS EMBARASSING with Wayne White in person at the Camera 3-September 16, 2012

After the PLAYLAND/SUTRO'S double feature at the Camera 3 on Sunday, there was another special event right afterwards that I just had to attend. The documentary BEAUTY IS EMBARRASSING chronicles the life and art of artist Wayne White, and to make this screening even more exciting, White himself was there to do an interview! This was a one-time event that I could not miss! 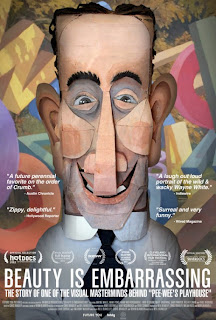 Wayne White was born and raised in Chattanooga, Tennessee and from an early age showed an exceptional talent for drawing. He later started his career as a cartoonist in NYC. He eventually  found success as one of the creators of the Pee-wee's Playhouse TV show. He also directed two music videos: Peter Gabriel's "Big Time" in 1986, and the1996 Georges Méliès inspired video "Tonight, Tonight" for the Smashing Pumpkins. He recently launched his second phase in the career: taking cheap, mass-produced lithographs which he finds in secondhand thrift stores and writes words or phrases on them in 3-D style. Interviewers include Paul Reubens aka Pee-Wee Herman, Mark Mothersbaugh from the band Devo, Wayne's parents, his family, and Wayne himself.

First time filmmaker Neil Berkeley does a fantastic and tremendous job of capturing Wayne's life in all its absurdity, its serious times, and the impact his art has had on the world, and the love and support from his parents, his wife and kids, and his friends. Wayne is one of those rare artists that finds humor in art and displays it in all its glory in his work. Wayne says that art is way too serious and his work is the antithesis to the art world.

Wayne is an individual that has had an interesting life to say the least, but his story is an inspiring one. Here is someone who followed his dream and stuck with it, not letting life's troubles and problems plague him and always finding something new to create. His loving wife and children help provide love and support as well as inspiration to him and his art. But it's his passion the fuels his fire of creativity and his belief in himself and not really caring what other people think of his work. The art world truly needs rebels like Wayne indeed.

BEAUTY IS EMBARRASSING is a wonderfully inspiring film, touching and hilarious that reminds us all to follow our dreams and passions! Everyone should see this film! 5 out of 5 stars! Highly recommended!


BEAUTY IS EMBARRASSING is playing in select theaters nationwide. To find out if it's playing near you, please visit the film's official website at http://beautyisembarrassing.com.

Thanks for reading, and enjoy the show!
Posted by Philip Castor at 12:55 PM