After seeing THE POSSESSION, I wanted to keep my horror themed day going. So for my second film of the day, I decided to see the new family film PARANORMAN in 3D, from the same makers of CORALINE. Luckily for me, there was a screening right after, so I made my way upstairs to the third floor of the Camera 12 to check out this family fright flick! 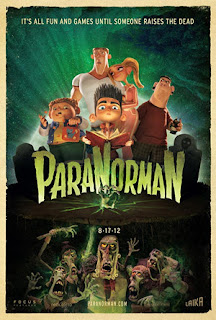 Meet Norman. He's your average kid. He gets picked on. He gets called a freak. He gets teased a lot my his fellow students as well by his own family. But there's a reason for these taunts. You see, Norman has a very special gift. He has the ability to see and talk to the dead. Of course, this doesn't help his self-esteem. But when his hometown of Blithe Hollow, Massachusetts, is threaten with an old witch's curse, he'll have to fight off zombies, ghosts, and his moronic townsfolk who are some of the clueless adults ever captures on film! It's really hilarious!

The film has a lot going for it. First being the fantastic stop motion animation! It's great to see this old fashioned art form still alive and kicking! Now I grew up with stop motion, mostly in the old Ray Harryhausen classics. There's a lot of layers to making these types of film. There's the background painting, then the sets, the foreground trees and whatnot, and the animated characters.

Second, because it's a three dimensional film, the 3D effects works great. It really makes everything pop out while simultaneously having depth, with only heightens the 3D effects. It looks amazing and for once, a 3D film that actually looks good in 3D! Now that is rare my friend!

The third and final ingredient that the film offers is a very strong story that contains some very important messages, much of these are towards the end of the film. Without revealing too much of the film, the main message of the film is not letting fear lead you to do something that would hurt other people. Because in the long run, you will regret what you did. In the film, nobody understands Norman, therefore, they tease and pick on him. This message come into play in the final scene of the film, which is one of the most intense scenes I've ever seen in a family film! It's always easy to be afraid of what you don't know, but it takes a brave person to ignore this fear and do what is right. A very important message in today's world!

Also, on a side note, make sure you stick around after the credits end. You'll see a very cool time lapse of how they made the Norman figure! It is very cool to see how they did it!

PARANORMAN is my vote for Best Family Film of the year! It offers plenty of laughs, some genuine scares, and some life important messages. All in all a superb film! 5 out of 5 stars! Highly recommended!!


PARANORMAN is currently playing in both 2D and 3D in theaters nationwide, including the Camera Cinemas here in the Bay Area. To view showtimes, visit their website at www.cameracinemas.com.

Thanks for reading, and enjoy the show!
Posted by Philip Castor at 11:34 AM