In the beginning. It was at the very beginning that I was hooked.

We see what looks like a bowl. Then the camera pulls back and flips to reveal that it is a ceiling lamp and we were looking at it upside down. The camera continues to pull back to an establishing shot to show us a small child's room at night. We see a boy fast asleep in his room. The color is of the film is drained to look like some sort of dream. We hear some faint music, violins are being played. The room looks like a typical boy's room. His bed sheets are plaid; there are some toys and comics in there. But there's something amiss, as we hear the violins become louder. Then we see it. There's some sort of shadow in the window near the boy's bed. The camera comes closer and closer to the window, the music becomes a little more louder and reckless. Then we see it. It is a elderly woman, dressed in a morning garb, just staring right at us. Then the scene fads, and then BOOM! The shrieking sound of a hundred violins playing frantically while the title INSIDIOUS in bold capital blocks appear with a hellish red color in the background.

It was right then and there that I knew that I was going to enjoy this film immensely. 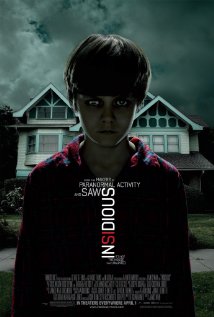 The film stars Patrick Wilson (WATCHMEN) and Rose Byrne (Get Him To The Greek) as married couple Josh and Renai Lambert, who and their three kids, just moved into their dream house. But there's something strange about the house. Books are falling off the shelves for no reason, Renai is seeing eerie shadows, and then their son Dalton (Ty Simpkins) is knocked unconscious and falls into a coma. Then things start to take a supernatural turn for the worse. Renai  enlists the aid of psychic Elise Rainer (Lin Shaye) and her ghost hunting team (Leigh Whannel and Angus Sampson), along with Patrick's mother Lorraine (Barbara Hershey), to help save Dalton from being lost in The Further. The key for his survival lies in Patrick's special gift.

James Wan, who along with his screenwriting partner Whannel, made the original SAW film, directed the film. What this dynamic duo does is bring new life to the classic haunted house tale. There hasn't been many haunted house films that have been truly terrifying. While many thought that PARANORMAL ACTIVITY and its sequel were scary, I believe that this film is far scarier and more effective, but on a different level. INSIDIOUS reminds me of that other classic supernatural film POLTERGEIST, directed by the great Tobe Hooper. Wan, like Hooper, creates that feeling of suspense with great directing and solid storytelling, with a combination of horrify scares and believable characters. This is one of the few horror films that has a cast of fantastic actors and actresses. Everyone's performance in the film was perfect, and that helps us, the audience, to relate to the characters and helps drive the film to what I think is a great twist ending.

In recent years there have been only a handful of horror films that I've enjoyed. Sam Raimi's DRAG ME TO HELL, Adam Green's HATCHET, and Rob Zombie's THE DEVIL'S REJECTS just to name a few. The horror genre has been plagued by countless remakes and sequels, which make this film a welcome breath of fresh air. Originality has long been absent in the genre, and Wan has contributed that once again with this film.

Being a horror fan, I love that INSIDIOUS was able to scare me. Throughout the film I had goosebumps, and a chill running down my spine. I haven't felt like this in a long time. Most horror films rely on gore, violence, and bloodshed (which I love as well), but there's something that I love more, and that's to be scared. That's the whole reason that people go to see horror film. They want to be scared, they want to be freaked out, they want that rush like if they were on a rollercoaster ride. It's been awhile since I saw a horror film that I enjoyed from beginning to end. With INSIDIOUS, I can finally say that I saw a great horror film. And I guarantee that you will too.

INSIDIOUS is now playing in theatres nationwide, including at the Camera Cinemas here in San Jose. To see showtimes, visit http://www.cameracinemas.com/index.shtml

Thanks for reading, and enjoy the show!
Posted by Philip Castor at 9:50 AM